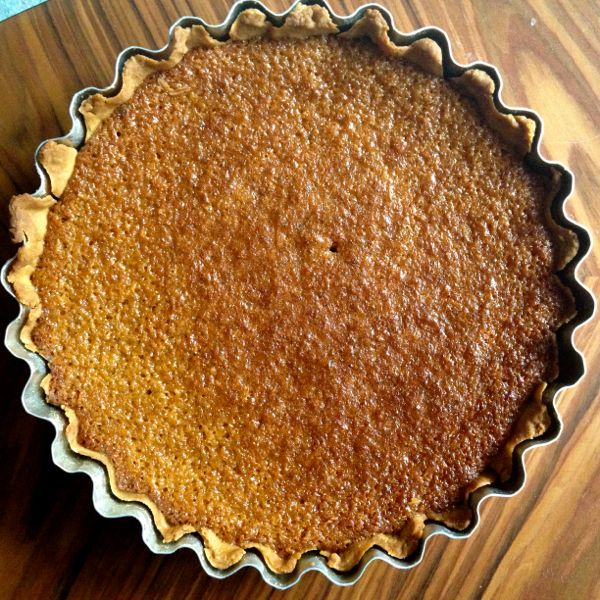 I have to say, I don’t really get the current coconut craze where it seems to be the new food Messiah du jour. I’m a fructose malabsorber so coconut milk doesn’t agree with me, mainly use coconut oil in the shower rather than cooking with it due to its strong coconut flavour and tend to only drink coconut water when hungover when I don’t mind the mustiness it has.

The one way I really like coconut is desiccated which I think is a throwback to my Northern Irish Proddy background where it crept into all kinds of traybakes and sweet treats promising ‘a taste of paradise‘ in a small grey-skied country with small minded views. I love a bit of it on a Fifteen or a raspberry ruffle bar and occasionally inhale a dark chocolate Bounty with indecent speed.

I don’t have a particularly sweet tooth so it takes a lot for a dessert to knock my socks off but the treacle tart I had at the Rochelle Canteen a few months ago was so good I’m still thinking about it. The lightest pastry and butteriest filling, it was dessert perfection in my eyes and I’ve been itching to play around with it since.

I volunteered to bring dessert for book group the other week and needed something that was non wheat, low fodmap, low fructose and without chocolate or caffeine to fit all our dietary requirements and the idea of reworking that treacle tart into a coconut version popped into my head. I’ll leave to the utter brilliant Low Fodmap for Life to pick apart the coconut question for hardcore Fodmappers here and get on with baking.

This recipe is one of the few times you see me pick coconut oil over butter for cooking (even I draw the line at using butter as body moisturiser or hair conditioner though!) I wanted that extra heft of coconut flavour but if you don’t have any, just sub in butter. Please don’t ask me if you can use other liquid sweetners such as honey or agave syrup instead of golden syrup as they are incredibly problematic [on the Fodmap diet] and I never use them.

For the pastry: (adapted from Dan Lepard’s sweet shortcrust pastry)

I am not a good pastry maker despite having deathly cold hands. It can sense my fear I think and shrinks away from me. I think I often add too much liquid to it but this Dan Lepard version for sweet shortcrust is the best version I’ve used. (I know it looks like it shrank in the photos, but I actually cut the block I rolled slightly too small.)

Sift the flour into a bowl and add the icing sugar and salt. Cut the cold butter into small pieces and rub into the flour until it disappears. Separate the eggs and beat the yolks with the cold water and beat it into the mix. I use a fork to just combine it and then switch to my hands to bring the pastry together.

It’s quite a soft almost sticky pastry and it needs a serious chill to be able to roll it. I usually put it in the freezer for 10 minutes and then fridge for 30 minutes if I need it then and there, but find it works best chilled overnight. Cut the block of pastry in two and roll one out to fit a 9 inch tart tin and then freeze the lined tin for 15 minutes.

Heat the oven to 180℃ and spread the desiccated coconut out on two lined baking trays and toast it for about 7 minutes. Hover awkwardly by the oven keeping an eye on it as it browns as it goes from slightly tanned to smouldering almost instantly. Take out and allow to cool.

Line your tart tin with foil or baking paper and fill with baking beans or rice and blind bake for 25 minutes. I don’t prick spelt pastry usually as it’s lower gluten and doesn’t seem to like it. I have no idea if there’s science behind this or me just being superstitious, but I’m sticking to it.

Put the brown sugar, coconut oil, golden syrup and water in a saucepan and heat to melt it all together. (If you do it in that order the golden syrup behaves itself nicely on an oiled spoon and cuts down sticky drips in the kitchen.) Add the toasted coconut and allow it to absorb some of the liquid for 2-3 minutes before turning the mix out into a big mixing bowl to cool.

Once it’s not hot to the touch, separate your eggs and add in the yolks along with the vanilla extract and salt and allow to sit for a few minutes. Take the baking beans out of the tart tin and bake it for another 5 minutes to crisp up slightly.

Beat the egg whites with an electric whisk until they are peaked and pillowy and then fold them into the coconut mixture. Pour the coconut filling straight into the tart tin and bake for 15 minutes until set in the middle. You might have a tiny bit of coconut mix that doesn’t fit the tin but it can be baked pastry free in a ramekin if you can want to serve a gluten free version of the dessert.

Take the tart out before it looks dry and don’t worry if there is a hint of moisture to the very middle when you test it with a skewer. It’ll be grand when you come to eat it. Cool on a rack completely. I baked mine the night before and it kept fine wrapped in a tea towel.

Serve in slices with some thick cream or creme fraiche on the side. It’s surprisingly buttery despite using coconut oil and not too sweet compared to some desserts so I liked something slightly lactic on the side as contrast. I was really pleased with how this tart worked out and would definitely make it again. The only time the book group was silent was when they were eating this which I’ll take as a good sign!