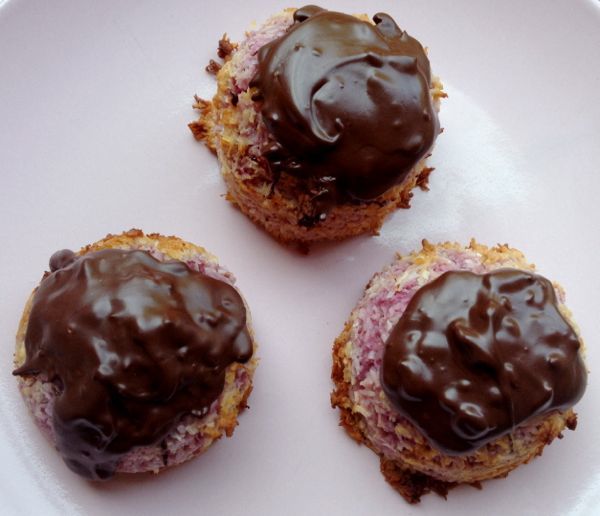 You will have probably realised from the photographs that these are macaroons, not macaron. Big hulking coconut numbers rather than their dainty Gallic cousins with their egg white shells. These are the thing to eat with a big cup of tea poring over the Sunday papers and putting your feet up. Sticky, chewy and very easy to make, I’m Team Macaroon all the way.

I think it’s because I grew up eating Raspberry Ruffles. Seemingly a Scottish and Northern Irish treat, these small nuggets of vivid pink coconut and dark chocolate were very grown up to me and I loved them. I hadn’t seen them for years but when I reasserted my love of the macaroon recently, I had a massive blast of nostalgia for them. And since raspberries are in season right now, it seemed a shame not to try making my own version, especially since they are incredibly easy…

First make your raspberry puree. I did this by simply blitzing 150g of fresh raspberries in the hand blender and then pushing it through a sieve to remove the pips. Frozen raspberries would work just as well out of season as freezing them makes them even juicier.

Line a baking tray with baking paper. Mix the coconut, the condensed milk, the whole egg and the raspberry puree in a bowl. I used a tube of condensed milk for ease as it’s exactly 150g.

Whisk the egg whites and and a pinch of salt in a large bowl with an electric whisk until they make medium peaks. Fold them in to the coconut mixture, making sure you don’t knock the air out of them by overmixing.

I used one of those lever action ice cream scoops to measure out the macaroons, but I think in future I’d roll them out with wet hands and make them freeform so there are more little edges to crisp up and become sticky and crispy as these are the best bits of a macaroon. I felt the scoop made macaroons that were too large and smooth.

Bake for 20-25 minutes at 160 degrees. Cool immediately on a wire rack and then top with chocolate you have heated in a bain marie. Don’t do this on the hottest day of the year like I did and then wonder why it was refusing to set, causing macaroon related chaos. Even with the chocolate, the macaroons will keep for several days in an airtight container. I think they are actually best when they are a bit drier after a day or two as it makes them chewier.

The raspberry in these keeps them a little bit tangy and not too sweet since there is no added sugar. The dark chocolate also has a grown up feel you won’t be able to resist with a mid afternoon cuppa!