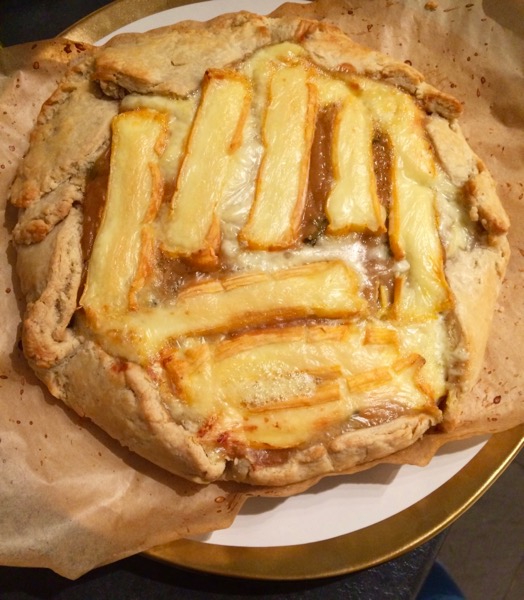 When I invite people round for dinner I always seem to cook huge lumps of meat like some kind of caveman type so I thought I’d try something meat free recently instead. I had a vast amount of cheese leftover from a previous lunch and decided to have a go at the food blogger trend of the galette which is basically a tart with rustic edges. I could relate in several ways so decided to do a poshed up Welsh rarebit with the cheese and a layer of spinach on a rye pastry to look like I eat vegetables.

This is mainly because I’m 38 years old and I’ve never eaten Welsh rarebit. Funnily enough it wasn’t a big thing in Northern Ireland and the only time I ever encountered it was in a Home Economics class when I was about twelve. Made with margarine, cheddar so mild it might as well have been rainwater and a distinct lack of beer on a slice of limp Chorleywood sliced white, it was one of the palest clammiest things I’ve ever encountered (and I grew up in a country of rain and untanned flesh.) I managed one mouthful and gave up.

So since I’m resolving long repressed traumas in therapy these days, it seemed like the time to address this one. I would make myself get excited about Welsh Rarebit come hell or high water. It turns out it wasn’t that difficult once I applied the trifecta of beer, cheese and mustard. My main issue was finding a recipe for galette pastry that wasn’t only in wretched cup measures.

I read a tonne of American food blogs to check the technique and adapted a Dan Lepard recipe for mustard shortcrust instead from Short and Sweet. And I obviously completely forgot to go rustic with the rye flour I bought specially and just used plain flour. Ahem.

This is one of those dishes that looks high impact and is actually very easy. You will need to allow cooling time for the pastry and the rarebit sauce though so it’s best to make all the individal bits the night before and combine before using.

Make the pastry by finally giving in and buying a food processor after years of making terrible rubbery shrinking pastry or simply rubbing the butter into the dry ingredients before adding the water and bringing it all together well. Flatten into a disc and chill overnight.

Wash your spinach if needed (I’ve recently discovered that Iceland sell huge bags of washed spinach for a quid versus all the other pricier supermarkets around) and melt the butter in a big pan and wilting the spinach into it in batches. Once it’s all reduced down, add the nutmeg and season generously with salt and pepper. Then tip it all out of the pan into a sieve and leave to cool and drain.

Melt the butter for the rarebit and allow it to bubble up until it just starts to brown slightly round the edges. Add the flour and stir well, adding the mustard powder as soon as it’s all combined into a roux. Keep cooking it out for about 2 minutes, seasoning well as you go.

Then start adding the room temperature beer to the roux a bit at a time to make your sauce. I find that using room temperature liquid this way makes a smooth lump free sauce and means I don’t have to use my balloon whisk which I resent having to try to wash up.

Before the last splash of the beer add the Dijon mustard and stir into the sauce and then add the last of the beer and the parmesan. The sauce should be quite thick but still drip off a spatula. It’ll thicken as it cools so don’t be tempted to make it too stiff at this stage. Allow it to cool making sure it is covered to stop the sauce developing a skin on the top.

The last stage before assembling the galette is to put the cooled spinach in a clean tea towel and squeeze the life and liquid out of it before leaving it in the fridge overnight to soak up more liquid or it will make the pastry on your galette soggy.

About 45 minutes before you are ready to put the galette in the oven, oil a square baking tray and then grease your work surface and lay out a large piece of greaseproof paper over it. Roll your pastry out on the paper to about half an inch thick making sure the edges aren’t too thin and will fold over nicely without cracking or breaking off. Using the paper makes it easier to lift as the the whole is heavy and unwieldy when filled and it was a bit of a wing and a prayer for me.

Make sure the spinach is as dry as possible and spread it out on the pastry evenly leaving about a 2-3 inch gap round the edges before topping it with the cooled thickened rarebit sauce. Layer the sliced cheese on top of the sauce and season well. Then start folding the edges of the pastry over. The first one will look weird and then it’ll start to neaten up and enclose the topping easily.

Lift the galette onto the baking tray and cut the paper smaller as needed. Bake the galette at 180C for 30 minutes and then allow to cool for 10 minutes on the tray to make it a bit easier to cut. Slide onto a serving plate and slice as needed. I served mine with a green salad and some steamed broccoli with garlic oil and hazelnuts.

It was excellent warm with the short crumbly pastry with the soft sauce and the cheese just melting into it but it was even better completely cold as a hangover brunch next day as it really brought out the sharp tang of the beer and cheese. I could be persuaded to this vegetarian lark I think…. 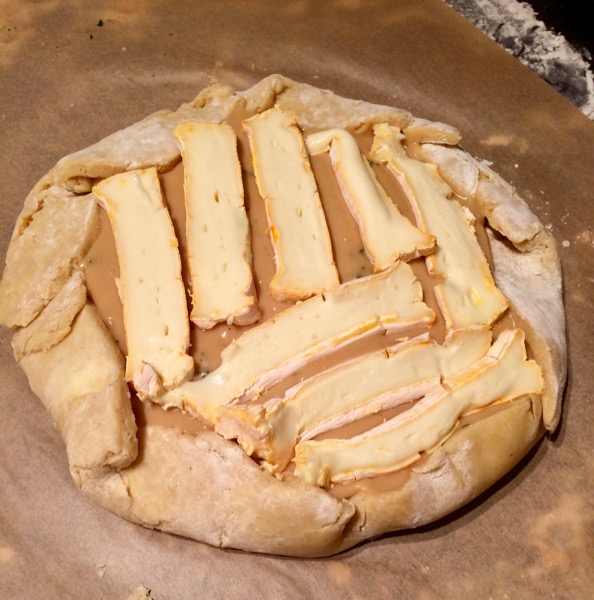 That looks and sounds absolutely my cup of tea!