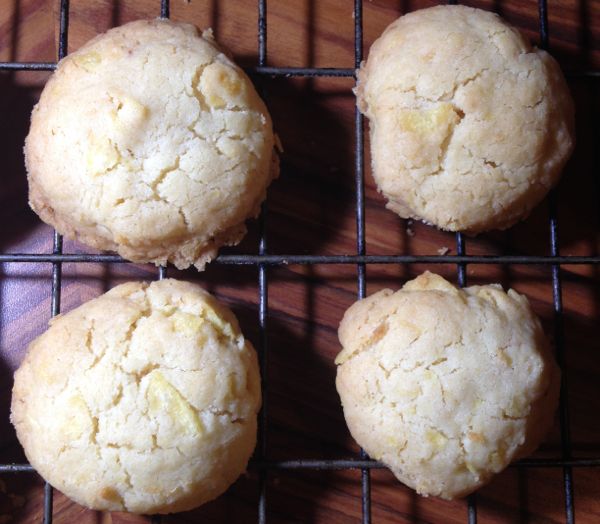 Yup. This week’s recipe is cookies made with ready salted crisps because a) I’m stuck in the house due to ill health and bored and b) why the hell not? January is a time of indecision for most people and I like to provide the answers to questions like ‘do I want crisps or a biscuit?’ with a literal ‘have both’.

I had randomly stumbled across this idea on an American blog ages ago and clipped it to an Evernote folder. I love Evernote. It’s like the organised version of my tendencies toward large piles of paper and lists and forgetting about stuff and my entire life is plotted out in there.

So when an old friend emailed to say he would be in London this week and would love to pop round for a long catch up and some home baking and I needed some inspiration, I just put the word ‘cookies’ into Evernote and this was the first hit in how my mind stores things.

It may sound odd, but really it’s just a novel way of reworking the good old salt and sweet combo and achieving my ambition to potato-ize every dish in the world. I do like lofty aspirations in my home baking, but I like deliciousness more. Would they manage that?

Spoiler alert: they are basically butter, sugar and crisps combined. They take deliciousness into a whole new sphere. These are so good I even stopped cursing the original recipe for using a cup and two thirds of flour. I want to be eating them right now, not using my hands to type this blogpost…

Preheat your oven to 160℃ and line two baking trays with greaseproof paper. You can cut out the whole tiresome weighing cups adaptation of the recipe because I’ve done it for you.

I mistook the 1/3 cup measure I have and the 1/2 cup one and for the first time ever in my life added more sugar to an American recipe than it stated, but skipped the whole adding icing sugar step at the end so it worked out fine.

Cream the butter and sugar together with an electric whisk until light, fluffy and pale and then add the vanilla extract. Add in the flour and when it is about two thirds combined, mix in the crushed crisps too.

It will all come together into a soft pliable cookie dough that comes away from the bowl cleanly. I pinched a sort of walnut sized ball of dough off it and rolled and placed on the trays without flattening. The original recipe shows thin flat delicate cookies. I preferred some heft myself.

Bake the biscuits for about 20 minutes until just colouring round the edges. They didn’t flatten much upon cooking so I could have put them closer together and done them all once. You live and learn.

Cool for 5 minutes on the tray and then transfer to a wire rack. They are light and buttery like shortbread but with the salty crunch of crisps and my friend and I inhaled several in close succession. I put some in a tin overnight and they softened slightly to be chewy and buttery with the salty crunch of crisps. This is a biscuit that likes to keep on giving frankly.

Make them. That’s an order. Celebrate butter. Celebrate crisps. Make January nicer with both. I might sub some rice flour in next time to give even more shortness, but if you excuse me, I have a biscuit tin to raid instead of chat to you lot…