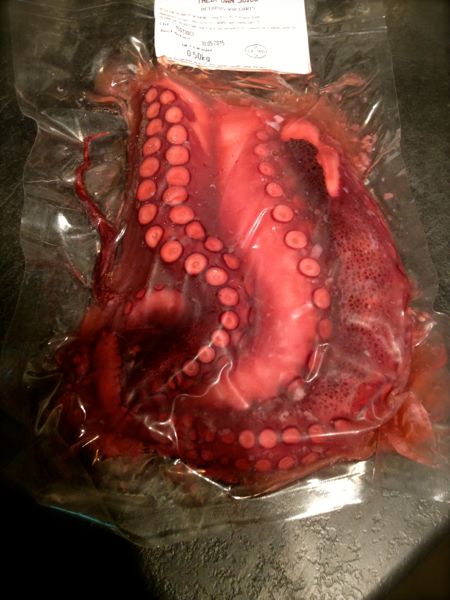 You know you are what most people would term a ‘foodie’ when you tend to keep some octopus in the house for an emergency. (That’s a dinner based emergency by the way. Anything else would just be weird.)

This is mainly because my local branch of the 99p Stores tends to sell tinned octopus cheaply and I stash it in the cupboard to go with pasta when I don’t much want to cook. However, this time my emergency octopus was the fancy Iberian stuff from Brindisa. Bought with a voucher, this packet of massive tentacles steamed in its own juices has been sitting in my fridge for ages. It’s been waiting for one of those moments where I want to pretend I’m Nigel Slater and make a meal more interesting that most people’s dinner parties but with stuff I happen to have to hand.

That moment came when I invited a friend round for dinner and was more interested in sitting on my patio gossiping about men and drinking dry Riesling than cooking per se. I had the octopus, I had some new potatoes and I had a thumping great bunch of dill. I also watched a lot of Ready Steady Cook in its day…

If you don’t have a bag of octopus around the house, you could use tinned or frozen baby ones from the Chinese supermarket you’ve simmered with lemon and bay leaves for about an hour and then cooled. I do this quite often in the slow cooker (see page 80 of Slow Cooked) and then freeze them for later use. Unlike squid, there isn’t much shrinkage or waste on an octopus so they are surprisingly good value.

If you do have a bag of octopus in the house, it’s literally boil in the bag as it’s packed in its own juices. Either simmer in a pot of water for 15 minutes or pop it in the microwave for 3 minutes and then allow to cool again for 3 minutes.

I also almost always steam my potatoes in the microwave these days. I cut them in quarters, put in a microwave proof bowl with a lid on and give them about 5 minutes per 250g. So give this amount 10 minutes and then allow to sit for a minute to absorb steam. Or boil them as normal and drain well.

Make the salsa verde by combing the dill and parsley in a hand blender with the oil, vinegar and egg yolk (this is optional. I had a spare hard boiled egg and know it helps emulsify the sauce. Double the mustard if you don’t have one.) Add the anchovies, olives, capers and mustard. Pulse to a thick but pourable consistency. Season and add any more mustard or anchovies or capers to taste. You could even chuck in a bit of garlic or fresh mint if you had some.

Slice your octopus into chunks and toss with the warm potatoes and stir the salsa verde through it all. Add some chopped fresh dill and parsley to look pretty, pour another glass of wine (Lidl’s dry Riesling is my current obsession) and tuck in. A simple barely cook dinner with almost no washing up which tastes of summer and luxury. What’s not to like? 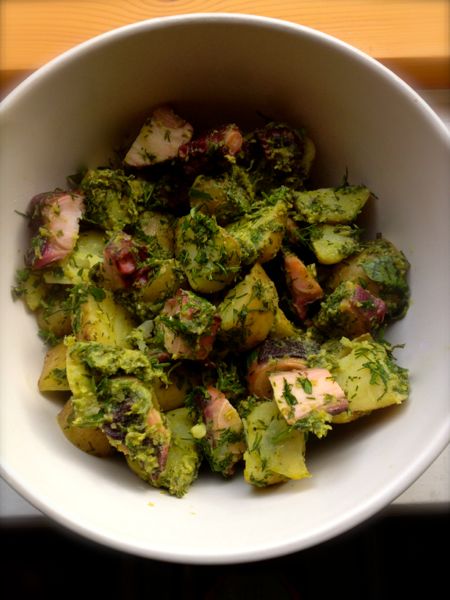 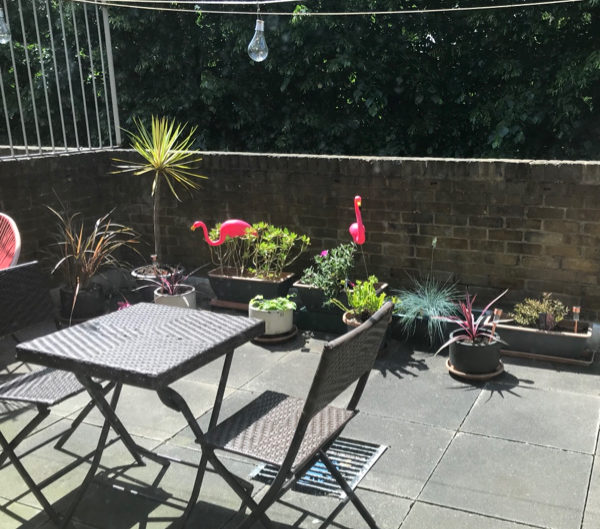