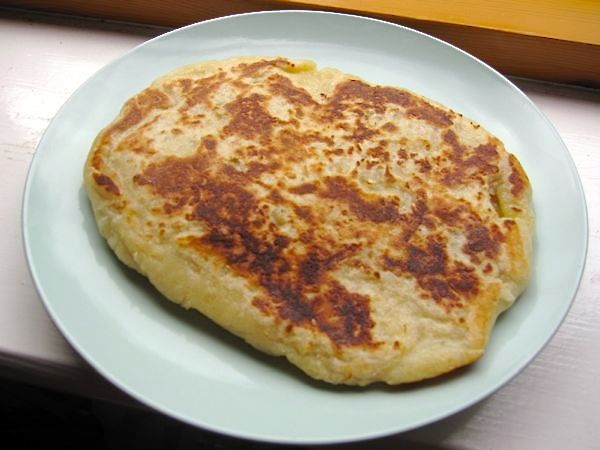 I grew up on apples and even though more fashionable and fancy fruits have come along since then, none of them have replaced the apple as well, the apple of my eye. My grandmother lived near County Armagh – with its world famous apple trees – and had an orchard of her own on the farm that produced beautiful Bramleys in abundance. A visit to her’s wasn’t complete without a slice of apple tart.

Another treat I remember when I used to stay with her in the school holidays was the Ulster classic of potato apple bread. Sheets of stodgy but delicious potato bread, filled with tart apple and fried til golden brown on the outside. It is a total treat at anytime, but particularly tastes of autumn when you could pick the apples freshly. It also used to pop up as a seasonal treat in the bakeries of Belfast as the leaves turned and the school year started.

I always thought it was a fiendishly tricky thing to make until I whipped up a batch of potato bread for the first time a few years ago and realised it’s as easy as falling off a log. It followed that the apple version couldn’t be much trickier. And after getting my hands on some Lambeth apples courtesy of Incredible Edible Lambeth and the London Orchard Project at the new monthly Make It Grow It Sell It market, the time had come to try it out.

Potato bread is traditionally made with leftover mashed potatoes, but if you manage to have leftover mash in your house then you’re a better person than I. Instead I peeled about 300g of Maris Pipers, boiled until tender, drained and dried well and added a knob of salted butter before mashing well. Don’t add milk or you’ll end up with something akin to baby food with this recipe. The salted butter stops the potato being bland so don’t skip it.

Then add around 75 grammes of plain flour into the mashed potato and form a dough. You may need more flour, depending on the wetness of your spuds. Mix well to form a stiff but malleable dough. Knead for a few minutes to firm it up and try to keep it moving all the time or it sticks to your surface and forms a gluey mess.

While you are making the potato dough, put your apples on to stew down. I like them fairly chunky so don’t chop too finely and don’t add more than a tablespoon of water to them while they cook. I don’t add any sugar as I prefer the tart tanginess of apple than the sweet apple sauce vibe. You could add cinnamon or cloves if you like too, but I didn’t bother.

Take about a fist-sized lump of the potato dough and roll out on some greaseproof paper until it’s as thin as you can without it being difficult to work with or likely to rip. Then place on a plate and cover with your stewed apple, leaving a good lip round the edge. But don’t skimp on filling! Then roll out another fist sized lump of dough on the greaseproof paper and place on top of the appley bit and seal well with your fingers making an enclosed sandwich.

Slide into a well-heated oiled frying pan. Give it about 4 minutes either side, but keep an eye so it doesn’t burn. Potato bread seems to stay raw for ages and then cook completely before you’ve even realised. Once golden and gorgeous on either side, I like to eat it as quickly as the insanely-hot apple filling will allow without hurting yourself.

It works really really well. The slightly salted potato brings out the sweet tang of the apples and it makes a perfect breakfast if you fancy a change from standard tattie bread. You can also serve it cooled down for elevenses or an afternoon snack with a big mug of strong tea. There just isn’t a time it’s not utterly delicious. Just make more than you expected: everyone wants seconds of this one!

Put An Egg On It - Miss South Login to Reply