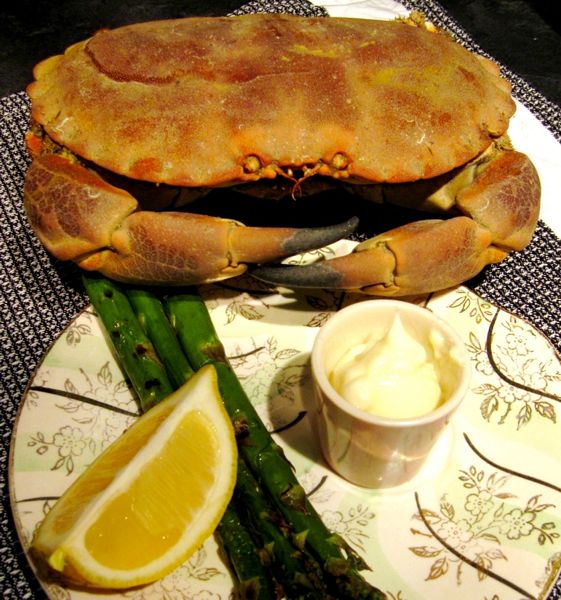 Some of my happiest childhood memories involve trying to avoid the pincers of crabs, both on long lazy fishing trips in Norway with a bit of string and some bait and a beloved plastic toy one that I used to attack my Sindy dolls with when playing Killer Sea Creatures of an afternoon. However, I don’t have any great memories of cooking or eating crabs apart from burning myself on a soft shell number at Little Lamb’s hotpot extravaganza last year, so when a crustacean caught my eye in Brixton Village at the weekend, I decided I had to rectify that and kill my own dinner for the first time.

My crab came from the fishmongers at the Pope’s Road end past the Agile Rabbit which I’ve never actually used before and while the crab was fresh, fiesty and fairly well priced at £4.60 for well over a kilo, there wasn’t the banter of Mash’s on Atlantic Road or even the other fishmonger in Brixton Village near the Colombian butcher. I rather missed it. It might have lifted my spirits knowing I was about to commit crustaceanide.

I got the crab home and phoned a family friend who has cooked and cracked more crabs in his lifetime than you or I have had hot dinners and checked what I was about to do with my shelled friend. We established that in the absence of sea water, I should salinate my water with a good handful of Maldon and some Thai fish sauce. I was more worried about killing the thing. He told me he usually stabs his crabs between the eyes with a metal skewer to despatch them. Worried by the fact I don’t have a metal skewer, I decided I would lull mine to sleep by popping it in the freezer for around 30 minutes first.

One sleepy beast and a pan of boiling water later, I took the plunge (although not as literally as the crab) and put it into the pot well covered at a rolling boil for around 15 minutes. There was no struggling, no screaming (from either of us) and no splashing, just a delighfully sea scented aroma as the crab boiled for 15 minutes. I occupied myself with griddling some new season asparagus and piling a plate with some soft wobbly lemon scented mayonnaise to dip the white meat in when the crab was ready.

I then scooped the creature out and left it to cool for about 15 minutes while I dug out a pair of nutcrackers, a hammer and an olive pick to make sure I could get every scrap of meat out of it. I then enlisted help to actually open the crab up. We ripped the claws off and then levered the purse open with the aid of a spoon. The dead man’s fingers peeled out easily and the brown meat glistened appealingly inside the shell. I took a teaspoon and sat down.

And fell in love with crab. Sweeter, softer, fresher, more tender and a million times better than another crab I’ve ever had before, i just adored scooping the brown meat out and feasting on asparagus and sweet seafood together, marrying it together with some mayo. My mum tackled the well filled claws and enjoyed the white meat immensely, taking forever to get through this killer sea creature in style. We both loved the super fresh flavour of the cook it yourself crab and I am sure I’ll be boiling my own again. I imagine fresh cooked crab will be even more amazing with freshly grown veg from the garden this summer. It’ll even be worth making my own mayonnaise for!