What Do You Actually Eat?

When you have the weird dietary needs I do, this is a question you get a lot from people so I thought I’d start keeping a weekly diary of my dinners here to show the contradiction of a limited diet with unlimited possibilities.

I’m extremely predictable about breakfast. I always always eat eggs. Usually fried on top of an English muffin but I’m also a big fan of the frittata. They are perfect for using up small amounts of leftovers especially since I can almost never eat a full portion of veg at once with my fibre phobic body and have to split them into two meals, making me the only person who can make an entire bag of spinach last a week.

I give breakfast variety by adding elements like cheese or bacon. I have a ridiculous love of that cartoon style pre-sliced cheese with the holes in usually sold here as Emmental or known as Swiss cheese in the US, but sometimes I go all sophisticated and have halloumi instead. And if I want colour I have bacon or tomatoes.

I tend to eat breakfast about 12.30 because I get up later than most people due to my health issues and find it incredibly filling so never eat lunch, usually having dinner about 7.30. I often have to lie down in the evening if I’ve been doing anything in the afternoon and rest so a lot of my evening meals are made in 30 minutes so that I can eat while watching soaps.

Between my budget, my food intolerances and my incredibly arbitrary but hard to shake rules around food due to my eating disorder I have a limited number of things I can eat but I’m hoping keeping a diary here will encourage me to a) try new things and b) adapt the things I do already eat and get my cooking and blogging mojo back after a period of food frustrations. So here’s what I ate this week… 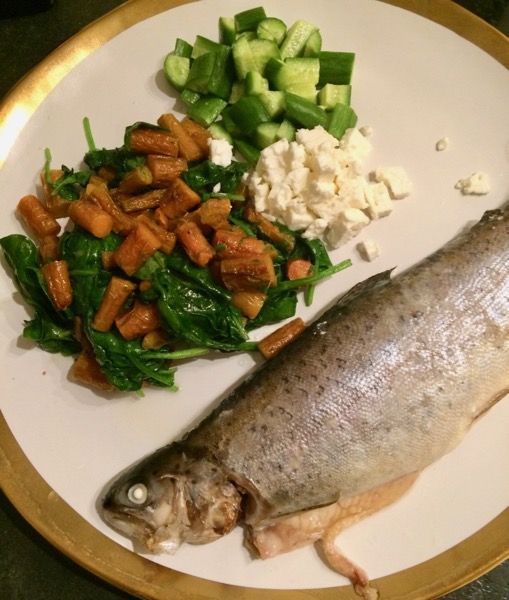 Baked trout with roasted baby carrots and wilted spinach and baby cucumber with feta. This was a Lidl special basically. I love the jumble sale vibe of shopping there when the themed weeks mean you have no idea what you might find from week to week. I call in on the way home from therapy and find the rummaging around oddly soothing.

They had two frozen trout for £2.99 and I bloody love a trout. They’ve always been my favourite fish since childhood but they are usually expensive enough to be high day and holiday treats for me so I couldn’t resist. I served it with their baby carrots that I batch roasted and a salad of their snack cucumbers for kids with a bit of the PDO feta they do crumbled over the top for a super salty hit. 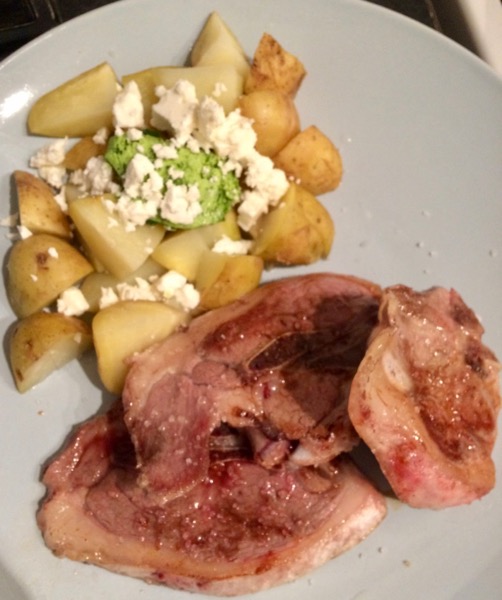 Lamb chops with baby potatoes, chive butter and feta. I was out for dinner on Saturday and Sunday which involved the glamour of eating pre-packed sandwiches on the bus so I needed something proper on Monday especially since I was feeling fairly dreadful.

This is my standard ME/CFS bad day meal. I need two things when I have the dreaded post exertional malaise that is the hallmark of the disease. This is like being ill from any kind of exertion either physical or mental. It feels a bit like you’ve run a marathon while being hungover on no sleep for three nights having been beaten by a shovel first. Your brain feels like cat food and your body aches while feeling like lead and I crave both red meat and sugar all day when I feel like that.

I keep a bag of frozen lamp chops either from the Sainsburys Basics range or Iceland in the freezer and simply defrost them in the microwave and pan fry them. These ones went with steamed baby spuds in the microwave and a blob of chive butter and more of that feta. Salt and fat and red meat with minimal washing up. Comfort food for sure. 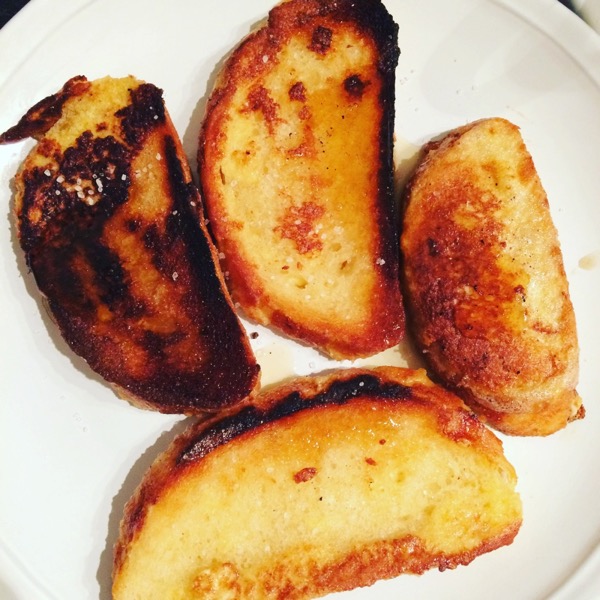 I never buy loaves of bread. They tend to go stale before I can eat it all or I can’t help myself and eat the whole thing obsessively and feel guilty but I wanted boiled egg and soldiers after the whole Twitter shock at discovering Americans don’t use egg cups. Somehow I made French toast instead with loads of maple syrup. 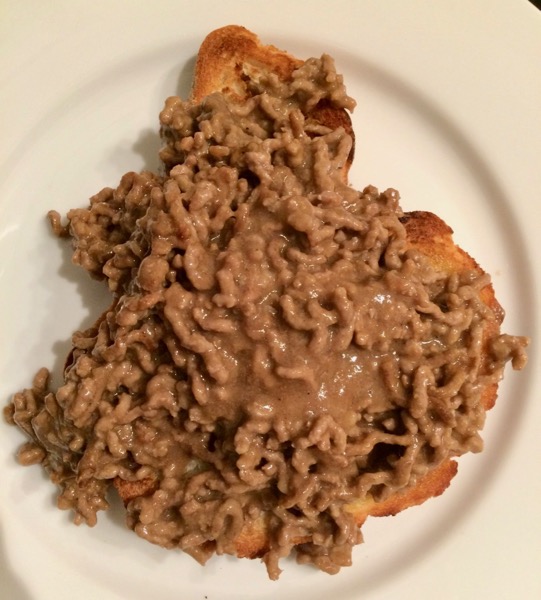 I am monkey see, monkey do when it comes to food and Twitter’s other obsession this week was Eater blithely announcing mince on toast is a ‘quintessential British dish’. I love mince so much I used to ask for it for my birthday tea and I couldn’t resist trying this. I made a really simple mince with a rich gravy using miso for flavouring and ate it on buttered toast. And it was really really good. Stop mocking and try it next time you have leftover mince. It’d be better even better as a toastie FYI. 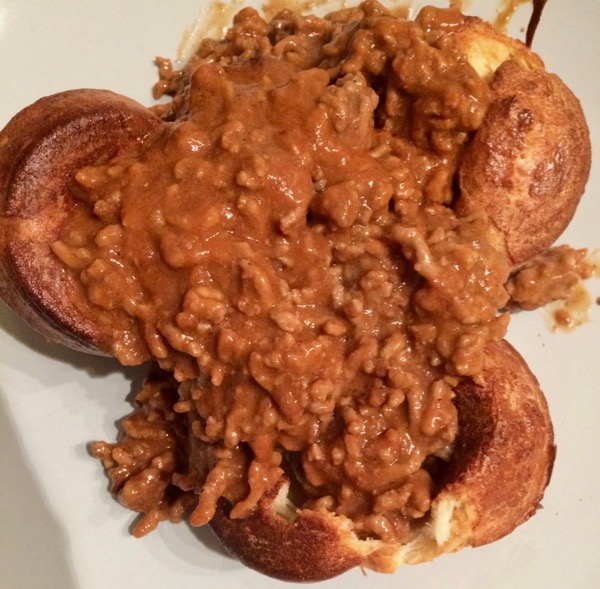 More mince with a bit of tomato juice added for a richer flavour. I can’t eat tomato puree so bottles of tomato juice from the Polish section of supermarkets are extremely useful for me. This time it was served on Yorkshire puddings made with spelt flour. They puffed up beautifully but didn’t get as good a hole in the centre as I’d have liked but well worth trying if you don’t eat wheat. 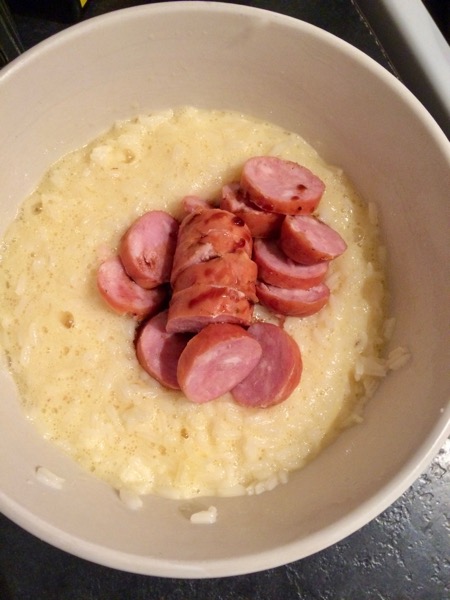 Japanese egg rice or tamago kake gohan with smoked sausage. Basically steamed rice with a couple of raw eggs beaten into it with a fork to create a light foamy almost porridge like texture. It works really well with those microwave packets of rice for a super fast filling dinner. Top with anything you fancy and a good slug of soy sauce. Another super speedy low washing up meal since I felt too tired to do much.

Next week I might eat a vegetable but don’t hold your breath. Brown food is my forte…

Thanks for sharing. Take care xo