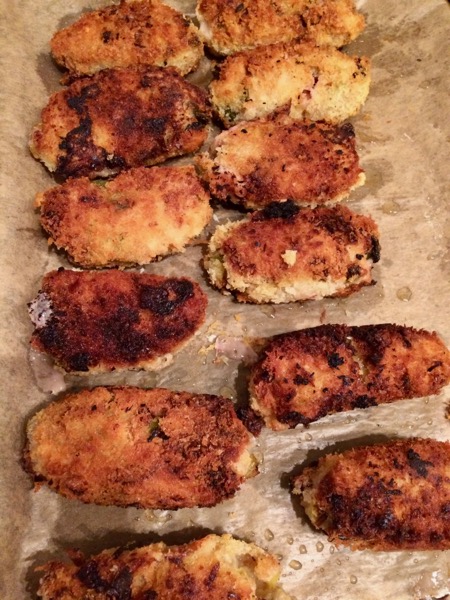 I’ve been doing some vegan cooking recently for other people and immediately I was intrigued to see how much I could tweak traditional dishes into vegan ones. Thanks to the new Free From range at Sainsburys offering dairy free cheese, one of my first challenges was vegan Glamorgan sausages and they went so well I’m entering them into the very limited repertoire I have of fodmap friendly vegan meals from now on too.

These are worth making as a big batch and freezing in separate portions as they reheat brilliantly and are a good meat free meal to have quickly especially at a time of year when sausages feature heavily in British cooking. You can make them vegetarian too by using regular eggs and cheese but I have to say I’m super impressed by the Orgran egg replacer I used. It’s brilliant even if you eat eggs but don’t want to use a whole one for egging and breadcrumbing a small amount of something and end up chucking half an egg out like I do as someone who lives alone. It keeps for ages in the cupboard and is a handy store cupboard item.

I was also quite impressed by the vegan cheese I used. It was the Wensleydale style with cranberries and the mouthfeel was really similar to dairy based cheese. I’m not sure I’d eat it off a cracker especially as the coconut oil base has a really low melting point and starts to get a bit moist at room temperature on its own. But the flavour was good and I can’t decide if it recommends it or damns it to say it was very similar to the Wensleydale with cranberry I’ve had before (which a cheese loving pal of mine swears is cheese Frankenstein and won’t touch.) You might disagree.

Thinly slice your leeks into half moons about a one pound coins thickness and sweat them gently in a large deep pan in the rapeseed oil for about 15 minutes on a low heat until softened but not coloured. Take them off the heat and add the mustard powder and the chopped tarragon. Season well.

Add the white breadcrumbs into the pan (I whizzed up a loaf of supermarket batch loaf in the food processor and dried the crumbs out on a baking tray in the oven at 180C while the leeks were softening) along with the melted ‘butter’, ‘eggs’, Wensleydale and cranberries and mix it all together well allowing the breadcrumbs to soak up the fat for 5 minutes.

Add the milk about a third at a time until the whole mixture comes together in a firm almost dough like feel. You might need more or less depending how much liquid your leeks gave out when cooking. Then wet your hands and pinch off a palmful of the mixture and shape it into a thick chubby sausage shape. Lay on a plate or baking tray and repeat, wetting your hands as needed, until you have about 18 sausages. Chill them at this stage in the fridge for at least an hour or overnight.

When you are ready to cook the sausages, mix up another 2 eggs-worth of egg replacer in a shallow bowl with the correct amount of fizzy water and then add about an extra teaspoonful of water to make the egg a little bit looser for ease of coating the sausages. The fizzy water gives a better less sticky texture to the egg replacer here.

Put your panko breadcrumbs in another shallow bowl (you could use more white breadcrumbs if you have them but I liked the lightness of panko for this) and egg and breadcrumb four sausages at a time before frying them in a frying pan with a neutral oil for about 2 minutes each side. I tried oven baking them to save batch frying and it was an unholy mess.

You can simply serve the sausages hot from the pan with any sides of your choice or allow them to cool and freeze in portions. Simply defrost them and fry for about a minute each side to heat them up when needed. They went marvellously with a very non fodmap friendly onion gravy and a pile of mash for comfort food but I think my next lot will go really well in a wrap with a quick tomato and cucumber salsa for a more summery feel while the sun is out even if they don’t quite run to barbecuing!

Erm, I hate to sound like a stickler, but if these contain Wensleydale, how can they be vegan?

They contain vegan Wensleydale as clearly stated in the recipe. It’s from Sainsbury’s Free From range as also stated in the post to show people how to use vegan and dairy free cheeses and adapt recipes that are not usually vegan. It’s a pretty good vegan substitute in fact. You’ll find it in the range as Wensleydale with cranberries free from dairy in all major branches.

This isn’t a sponsored post. I was just cooking for a friend and impressed by it.