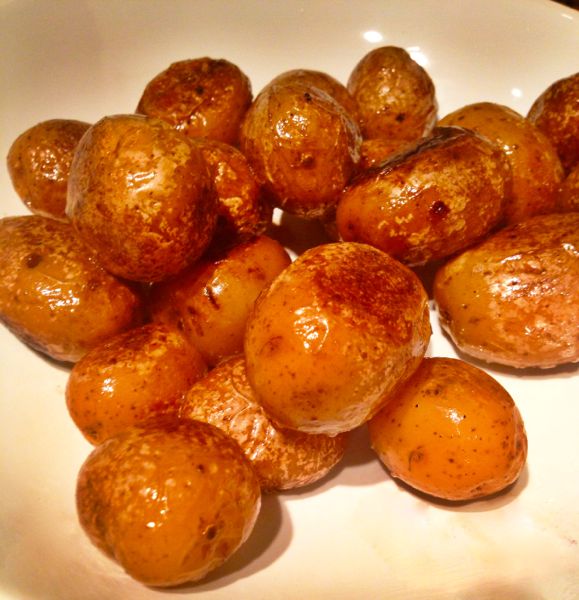 Until I got my new cooker earlier this year with its top oven, I’ve always had that dilemma when doing a roast dinner about how you balance different timings and temperatures for potatoes and meat. And since I got the new cooker, I just haven’t made a roast dinner…

But at Christmas you often don’t have enough roasting tins, eyes on the clock and hands to co-ordinate it all and I wondered if there was a way to give you great potatoes with minimum fuss.

After reading Felicity Cloake doing ‘perfect’ fondant potatoes in the Guardian recently, I decided that they were definitely not what I was looking for since most of them looked stressful in the extreme, but I wondered if I could do a version in the slow cooker?

Life is too short to melt enough butter for that though and duck fat is always on offer around the festive season, so I thought I’d basically confit some baby potatoes instead and see what happened.

And spoiler alert: good things happened. I mean, I know it would be tricky to make something bad with duck fat and spuds, but these were really good. Softer and richer than a roastie and so easy. 5 hours in the slow cooker and 5 minutes in a frying pan. Sea salt scattered over them to serve. Potato filled silence at the table as people ate them. Could be just what you need at Christmas…

There’s barely a recipe for this but I like writing so I’m sure I’ll spin it out. Put the whole baby potatoes in the slow cooker crock. I used 500g in a 3.5 litre slow cooker which was one layer but you could double the amounts and do two layers.

Melt the duck fat in the microwave for about 50 seconds (minus the lid) so it’s liquid and pour it over the potatoes so they are covered. Don’t worry if the very tips aren’t submerged. Add the fresh thyme if using.

Put the lid on the slow cooker and cook the potatoes on high for 5 hours. They will wrinkle and darken as they cook but hold their shape. Don’t be tempted to give them longer to be sure they are cooked. Potatoes cook surprisingly quickly in a slow cooker.

Use a slotted spoon to scoop them out onto a plate lined with kitchen roll. You can leave them to cool up to overnight if needed or pop them into a hot frying pan immediately. Keep the potatoes moving as if sauteeing them and give them a few minutes until crisped on the outside. Serve as soon as possible, making sure you pour the duck fat back into its container while it’s still liquid.

The potatoes actually don’t absorb very much of the fat but cooking them this way makes them the richest tastiest steamed potato you can imagine which, whisper it, makes a lovely change from roast potatoes in this season of repeat roast dinners.