How Do I Buy a Slow Cooker? 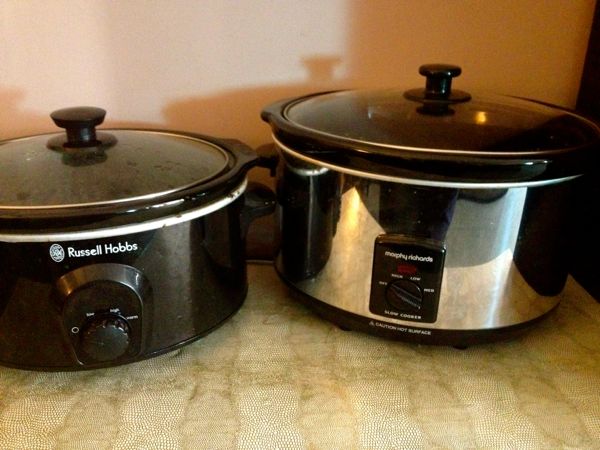 So you’ve decided to buy a slow cooker? Welcome to the least time consuming cult in the world. We find time to put our feet up (at least metaphorically) and get on with all the other stuff we love in life and then sit down to a proper meal at the end of it. I particularly love the low washing up levels that accompany it.

But what do you do if you’re still standing on the side of the fence with the stove and saucepans, looking forlornly at a dish needing steeped and don’t know which toe to dip in first to join Club Slow Cooker? I’ve got some advice for you here so you’re ready to start using the recipes in Slow Cooked.

Like any life decision, start by asking yourself ‘what do I want from this experience?’ A slow cooker can fit many lifestyles. I live alone and like to cook a couple of portions of food at a time (one dinner, one lunch, one for the freezer suits me) so I wanted a slow cooker that wasn’t too big. I’m also pretty slow myself in the mornings (we’re still counting anything before 4pm as the morning, right?) so I don’t want one you have to preheat for up to 20 minutes before the food goes in. I’m primarily round the house all day so I don’t need a digital timer to turn it on or off. You might be totally different and need a slow cooker big enough to double as a baby’s bath with a control panel that could land a plane. Thinking about how the slow cooker will fit your life is the crucial bit before you start shopping so you don’t buy a white elephant.

No matter what your needs are, consider a couple of other things. An oval slow cooker is always easier to fit stuff into than a round one. You must never ever fill a slow cooker more than two thirds full so really small ones can be restricting, especially if you want to make soup. Think about storage. Where will it fit in your house? Both mine inhabit the living room rather than the kitchen and the bigger one makes an excellent and highly mouse proof breadbin when not in use. As long as you have somewhere flat like a shelf, table or desk to put a slow cooker, it needn’t be restricted to just being kept in the kitchen.

Now think about your budget. Slow cookers save money on the costs of cooking and allows you to use more economical ingredients such as pulses or cheaper cuts of meat. I’ve also found that you don’t have to spend a fortune on the actual slow cooker itself to get a good steady workhorse of a one. Friends have got a cheapy ones from Argos years ago that are still going strong and I’ve seen decent models with lots of features like a timer and keep warm function for under £20 at both Sainsburys and Morrisons.

I tested the book on a combination of brands. There was a Russell Hobbs, which was my gateway slow cooker. I’ll always think fondly of it for what it introduced me to, but I hate the fact the keep warm and high heat settings are easy to confuse and have often tried to cook my dinner over a heat less strong than a birthday cake candle. It also insists on preheating. I had a quartet of Lakeland slow cookers which I absolutely loved to bits. They don’t need preheating, the settings are clear, the lids don’t rattle as much as some when they get going and they are super easy to clean with their slightly matte finish crocks.

I also had a 6.5 litre Morphy Richards which I found hard to get clean as it barely fits my sink and I’m scared of dropping the crock when it’s wet as it’s quite unwieldy as an item. The finish also marked relatively easily if I was cooking anything to a sticky finish. I tended to steep it with hot water and soda crystals to be sure and then oil it lightly before use to season it.

So I did love the ease and lightness of its stablemate, the Morphy Richards Sear and Stew with a non stick crock you can seal meat in directly on the cooker before slow cooking. The crock is easy to maneouvre when being washed and much lighter to lift than ceramic ones so it’s a total winner if you struggle with heavy items. I never used it to sear anything though as 90% of the time I don’t sear meat before slow cooking as I think it can make the meat wetter in texture by overcooking it so I can’t vouch for how great it is for that need. (The only time I sear meat is for aesthetic purposes like on chicken wings or sausages for example.) I’m also cautious about how long that Teflon coated crock will last compared to ceramic, but you might be easier on non stick than I seem to be.

None of my slow cookers were of the kind that is 4 or 6 or 8 in one and promises to cook rice, take the dog for a walk and pour you a glass of wine while making sympathetic noises at the end of a hard day. These all get pretty scathing reviews online from Which? and from householder users (and yes, I read them all for you.) Nor did they have start or stop functions or digital timers. I simply bought a timer plug from Amazon and blew my mind working out how to set it. It made the achievement of waking up to fresh cinnamon buns and creamy porridge in the mornings all the finer.

I wasn’t sponsored by any company or asked to use their product when I was writing Slow Cooked so my views are entirely my own and based on personal experience. I don’t like to play favourites with my brood, but I think most people would get along very nicely with the 3.5 litre Lakeland model. I admit to be biased against searing slow cooked meat and the fact the Sear and Stew is cheapest in the red finish which clashes with everything in my kitchen…

Once you’ve got your slow cooker, follow these basic tips and I think you’ll escape the sense of anti climax many people feel on using it. Cook something simple that you’ve made before so you can compare the methods properly. A poached or pot roast chicken is a good idea here as it’s foolproof and allows you to see how evenly and steadily the slow cooker heats.

Add about one third of the amount of liquid you’d add for slow cooking on the cooker or oven and about twice the amount of flavouring. Slow cookers form a steam seal and don’t allow liquid to escape so you can get very watery dishes unless you adapt. This higher liquid content and the long cooking times can mute the tastes of herbs, spices and seasoning so be more generous.

Be prepared when they say slow cooking for it to mean slow. A good slow cooker won’t allow you to see the changes to the ingredients happen before your eyes unless you enjoy watching paint dry levels of speed. Eight hours is the average for a slow cooker dish. So it’s crucial that you don’t lift the lid while your food is cooking. Not even once or twice just to see. Keep your hands away from it and it clamped down shut.

Everytime you lift the lid of the slow cooker, you break the steam seal, lower the temperature and add 20 minutes minimum to the cooking time to get the heat of the food back to a safe and effective temperature. So three wee peeks throughout the day adds an hour to the length of time to cook your dinner and I think makes everything less tasty. Put everything in the crock and let it get on with it. Warn everyone in the house to do the same. Basically slow cookers like to be ignored. They are like cats with less attitude.

It’s fine to lift the lid once the food is cooked and the slow cooker has switched over to the keep warm setting. This is very useful if people in the house aren’t all eating at the same time or like to come back for seconds. Don’t use this setting for more than 6 hours at a time. Allow the crock to cool enough to handle easily, put the food into a container and cool and refrigerate and treat with the care you would any leftover or reheated dish. Never use the slow cooker to reheat the food.

Keep these tips in mind and in next to no time your slow cooker will be the apple of your eye and aside from the whole joy of homecooked food with very little faff, you’ll love it so much you’ll treat it like a fuss free pet that doesn’t shed hair and feeds you instead.