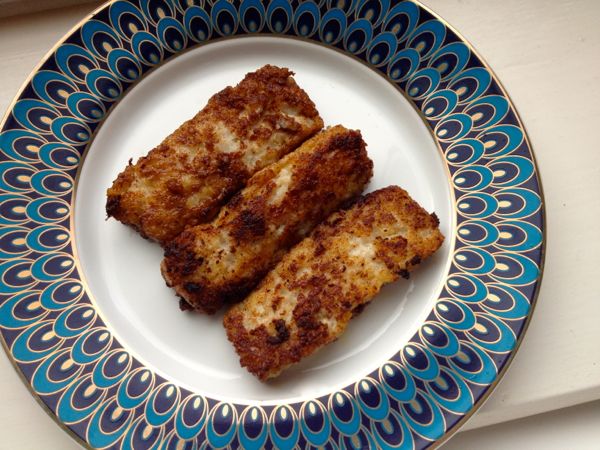 I am probably constructed half and half from oats and potatoes if you consider my Scottish and Irish heritage. Childhood days started with oats in the form of porridge and ended with spuds for dinner very often. Both are still mainstays of my table even now.

Porridge is surprisingly controversial. People have strong feeling about the type of oat  to beused, the ratio of water and milk and whether salt or sweet and they stick to their guns. I make mine with Flahavans oats if I can get them, using half milk and half water and I add a pinch of salt as the oats cook. This makes it all the right smooth consistency for me without being too creamy and the salt makes it taste much more intensely oaty. I then tend to eat mine plain or with some milk on top for a contrast. Occasionally I have a little drizzle of golden syrup, but I have fairly simple tastes with my porridge.

Others however have magical porridge powers involving spurtles and things like steel cut or pinhead oats and take it all very seriously. They also mention something about a porridge drawer which I was reminded of recently when talking to Caitríona at Wholesome Ireland. This would have been a small section in a dresser where the leftover breakfast porridge was poured and allowed to cool and set before being cut into slices. Children ate when they came home from school or men took it as their ‘piece’ for lunch. A forerunner of the flapjack or the cereal bar basically.

Apparently the porridge drawer was common in both Ireland and Scotland, but I’ve never seen one or eaten from one. Curiosity piqued I asked my dad who grew up on the west coast of Scotland and he remembers the sliced ‘purritch’ being fried up in bacon fat or butter and served for dinner. I love the idea of being able to go savoury or sweet here but I’ve tempted go sweet as I had some leftover spiced butter from making hot buttered rum at Christmas.

Make your porridge by putting the oats, water and milk in a pan with a pinch of salt. Cook slowly on a low heat for about 15 minutes. Slower cooking makes the oats creamier and smoother. Stir it regularly to keep it from sticking to the pan. Once it is cooked, pour the porridge into a clean rectangular container such as a tinfoil takeaway tin or tupperware container. Leave the lid off and allow the porridge to cool completely, preferably overnight.

Next morning, your porridge will be solid and easy to slice as the oats set firmly almost like a flapjack. Slice about an inch thick. You should get about 3 slices per person.

Make the butter by beating the spices into the soft butter. It will turn quite dark and speckled as you do this and smell amazing. I used salted butter as it works well with the sweetness of the spices.

Heat the butter on a medium heat and fry the slices of porridge in it until golden and crisped on the outside. This should take about 2-3 minutes each side. Serve piping hot with a drizzle of golden syrup if you’re pushing the boat out.

I sampled a bit of the set porridge before frying it and wasn’t impressed as it seemed very bland. So I was slightly trepidatious when I tried the fried porridge. And I was utterly blown away by how good it was. The spices were just right and the butter had caramelised the outside and the salty sweet crust was perfect. If it wasn’t so filling, I wouldn’t have been able to resist another slice or two. It was like the best French Toast I’ve ever eaten and further confirmation that oats are awesome!