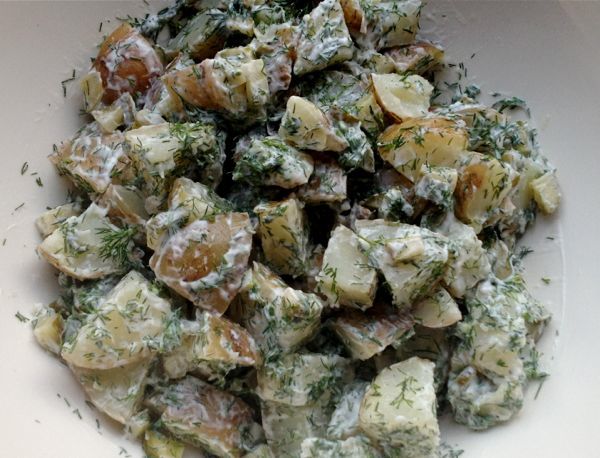 I remain ever optimistic that spring, never mind summer, is just around the corner. Warm light evenings, the smell of barbecues in the air, Pimms on the patio, all the indicators of warm weather for many. But for me, I know it’s summer when it’s time to make potato salad.

I grew up on potato salad. Family picnics and barbecues always involved a big bowl of it designed to last several days out. But because my mother makes the best potato salad possible, it never lasted more than one meal with the last chunk of spud highly prized.

Since I started blogging, I’ve debated whether to share this family secret with you all, but since pretty much every person who has ever tried a batch of the potato salad made my way has asked for the recipe, I’ve decided the time has come. The secret is a little bit of milk in with the mayonnaise. Before you raise your brows, it lightens the mayo so that it coats the potatoes better and thus makes the salad creamier without being greasy or overwhelming.

I’ve grown up making this so I never weigh anything so I’m giving you a description not a list.

You can make this with any potato really, but a firm waxy salad potato like a Charlotte is perfect. Sainsbury’s Basic Salad Potatoes at a quid a bag are simply the ones too knobbly and bobbly to make it to the Taste the Difference range but damned good all the same. Cut your potatoes into quarters and leave the skin on. Boil for about 8 minutes or until al dente. You do not want a floury fluffy potato here so don’t overcook.

I flit between two types of potato salad, either a slightly Germanic one with lashings of chopped dill and gherkins or a more Irish version with chopped scallions. Both are delicious. I find the dill version a better basis for a meal and the scallion one a side dish.

If you are doing scallions, slice both the green and white while the potatoes are cooking. Place them in the colander you’ll use to drain the potatoes and then empty the pan of boiling water and potatoes over them. This blanches them and stops them being too oniony. Allow everything to cool for about 30 minutes.

Boil the kettle and fill a mug half full of boiling water. Place your tablespoon in it and allow it to heat up slightly. Then scoop out your mayonnaise into another mug or small bowl. Measure out half a tablespoon of milk. I use semi skimmed. You could use full fat. Mix well. You’re looking for a consistency slightly thicker than double cream, but still suitable for pouring. Add the other half tablespoon if needed (if you use the oddly textured Hellmanns, you probably will.)

Pour the mayo dressing over the still very slightly warm potatoes and the blanched scallions and mix well so it coats well. If you’re using dill instead, add it and the gherkins at this stage. Serve the salad and watch the bowl empty rapidly. My suggestion is to make a lot more than you need. There is never enough…