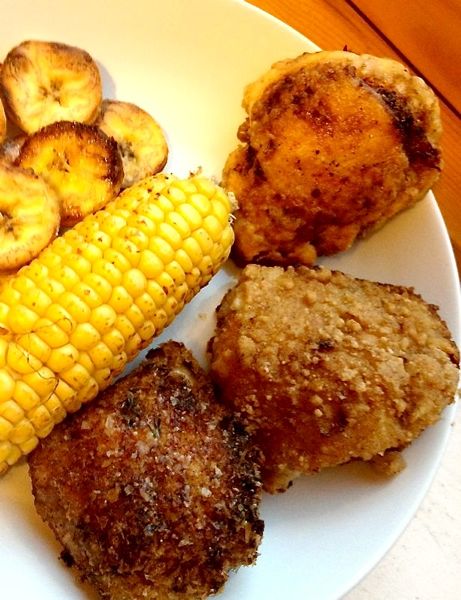 I hear fried chicken is the next ‘junk food’ to get the gourmet treatment and because I live in Brixton, my tolerance for hipster venues is plummeting, I decided it was time to conquer my fried chicken demons and learn how to do it at home where the whole thing would take less time than queuing up in Market Row. I also decided to set myself the challenge of making it all gluten and wheat free as well…

I’m not gluten or wheat sensitive, but for some reason three different people have had conversations with me recently about fried chicken coatings that happen to be gluten free, so inspired by their enthusiasm, I thought I’d steal their ideas and do a fried chicken crunch off, testing each version against each other. All three were good. All three were easy. One was a clear winner.

I standardised a bit. Each recipe does 4 pieces of chicken. All the chicken was free range and was bone in and skin on thighs. I marinated them in yoghurt loosened with lemon juice to save you all hearing my obsessive rant about why you can’t get proper buttermilk in England again. This would be brilliant marinated overnight, but a couple of hours will do nicely. If you don’t eat lactose, simply use lacto-free yoghurt or brine the chicken instead. About 20 minutes before you need them, drain the thighs in a sieve so they aren’t too wet. Then turn attention to the coatings.

This is basically going a bit 70s and using dehydrated instant mash flakes as your topping. You need the cheap ones from a Basics range so that you don’t accidentally end up with potato paste over chicken skin. It’s dead simple. Put 1/2 cup or about 50g of flakes in a shallow dish and add the seasoning of your choice. I went with thyme, black pepper and paprika. Then dredge your chicken well each side without shaking too much coating off and shallow fry for 10 minutes, turning gently or spooning hot oil over the other side to firm it up before turning. Finish off for 10 minutes in the oven at 180℃. Or simply cook in the oven the whole time without adding any extra oil at 200℃. It won’t be as golden, but it’s quick, easy and crunchy at the same.

Slightly more complicated than the first recipe, this has three ingredients instead of one. Mix 1/4 cup (approx 25g) of rice flour and 1/4 cup of cornflour of each in a dish and add your choice of seasoning. I used Old Bay and cayenne. Then add 4 tablespoons of the yoghurt/buttermilk mix and with your fingertips, rub together until you get what looks like slightly damp breadcrumbs. You don’t want it sticky or too clumpy so keep rubbing til it’s right. Then coat the chicken on each side making sure there are no lumpy bits and shallow fry as above. Or again, oven cook the same way as above.

A little bit Chinese in style, this one uses egg whites and cornflour beaten together to make a batter. I used 2 egg whites (from the approximately 9000 leftover from my ice cream making) and 1/4 cup cornflour whisked together. I’d run out of seasoning ideas, but some MSG might have been good here. Your batter needs to be thick, not liquidy and move quickly or it’ll solidify into something like cement.  Coat the chicken well and then fry. This one needs oil, not the oven. I ended up with a light puffy batter on each side and an uncooked seam from shallow frying. I basted it with hot oil to rid me of this, but it might have been easier to deep fry it. Rest it in a warm oven for 10 minutes after cooking through.

All the chicken was incredibly juicy and tender from its lactic acid bath. Each one had a good contrast between the coating and the meat, but my winner was the potato coating. The rice/corn flour one had a floury squeaky mouthfeel that cloyed slightly, while the batter one was a bit greasy as it absorbed a lot of oil in comparison to the others and both lost their crunch quickly on the plate, becoming a bit gluey, while the potato flakes held up well after cooking and had the most interest to me. It would also have worked well as an oven dish and would be good with fish instead.

I liked all of these better than my usual wheat flour recipe which required marinading, egging and coating and then double dipping to get a good crunch on. The gluten free ones were all very simple and it pleased me the simplest one of all won out. I served my chicken with some roasted plaintain and chilli rubbed corn on the cob for a carb fest, but some slaw would cut through it all nicely and add some colour to the plate. Serve with a refreshing beer and you’ll be frying tonight without having to leave the house…