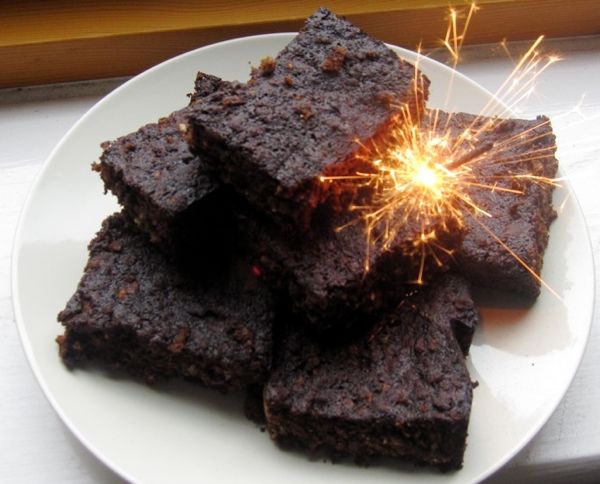 I don’t have much of a history with Bonfire Night. Not celebrated in Northern Ireland for a variety of reasons, Halloween was our festival instead. Talked of in Enid Blyton books and Blue Peter, I was vaguely aware of bonfires, Guy Fawkes and pennies for the guy as a child, but never celebrated it until I was about 15. Seeking teenage independence, I travelled over to visit England at half term then and my long boat and train trip was rewarded by a trip to the hills outside Rochdale with to experience a Northern Bonfire Night properly.

Around the huge bonfire, there was treacle toffee, sausages, black peas and parkin. Memories are slightly hazy from the lashings of Boddingtons also available and while the peas were just the thing to thaw you on a freezing cold night, but it was the parkin that warmed my heart completely. All sticky with treacle and chewy and delicious with spice, it almost converted me to standing in fields in November.

Sadly, they don’t go in for parkin in the south and thus I’ve still never really embraced Bonfire Night even though I’ve lived in England for years. So imagine my glee when listening to Woman’s Hour this week, I discovered parkin was super easy to make and that I just had time to let it mature in time for the big night.

In the end, I used this recipe from Waitrose to make my parkin as I couldn’t be bothered adjusting the imperial measurements from the Radio 4 one and it didn’t call for self raising flour as I could neither be bothered to mix my own or get dressed to go and buy some. I subbed golden syrup for the honey and left out the sugar as all that treacle and syrup is sweet enough for me. I used lard instead of butter and upped the spicing with twice as much ginger and a pinch of mace. The whole thing barely took longer than setting out all the ingredients it’s so simple. Do use a pan to heat the milk on the stove as you add the bicarb to it and it expands quite a bit. It’ll be volcanic in a jug.

Other than that, it’s simple, straightfoward and perfect for kids to do. Don’t overmix the batter, it can afford to be a little bit lumpy like muffin batter. Then pour into a deep square tray you’ve lined as parkin is traditionally served in squares. Recipes vary regionally and this one sounds more like the darker Yorkshire version. Pop in the oven for 50 minutes and get very hungry as a delicious oaty flavour heats up the kitchen.

You’ll need good willpower with parkin. It’s essential that you allow it to rest and don’t eat it straightaway. A week is about the length of time recommended to let it mature into proper sticky heaven. I cooled mine in the tin, cut into squares and stashed it away in a tin on a high shelf out of mind and managed to forget about it for about a week.

And it tasted amazing. Dark with treacle, spiky with ginger and smoky with mace. But it was drier than I expected. Mind you I was expecting it to stick to the roof of my mouth and melt on my tongue which might be slightly over the top. I’ve only got a 15 year old memory to compare it to after all. And I did manage to consume two large pieces with pleasure and a large cup of Yorkshire Gold in front of the Corrie omnibus which still made for a fairly perfect morning. I’d stick a bit more syrup in future, cook it slightly less and maybe only leave it for two or three days next time. But now I’ve rediscovered parkin, I’ll be putting Bonfire Night in the diary…