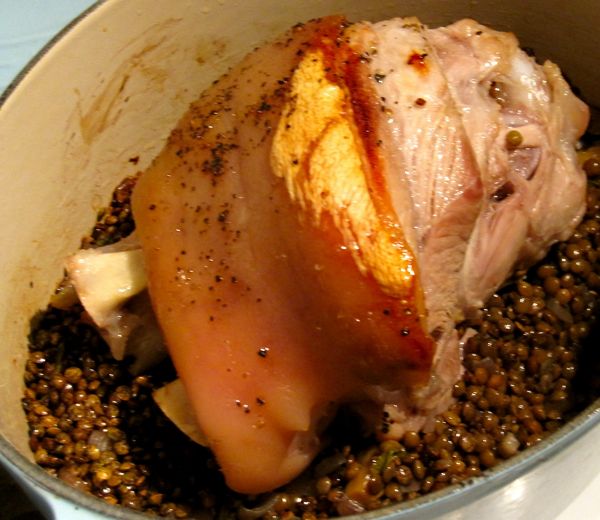 Yesterday I found myself in a branch of Morrisons in search of their Ten Pound Pimms’ offer. Sadly Camberwell was very lacking in refreshing summer beverages, but managed to redeem itself with an abundance of delicious pork products. I resisted the temptation to stock up on pork dripping and bacon ends, but I did succumb to a splendid looking pork shank.

I’ve never seen one of these before, either to buy or on a gastro-pub menu, despite the ubiquitousness of the lamb shank, but the price made me look again. Just over £2 for a kilo or so of shank appealed to my currently lean finances (even if I’m probably going to hell for buying intensively reared meat.) The label suggested roasting it and even at the counter my mind wandered to making something wholesome and hearty with Puy lentils…

Back home, I turned my attention to my cookbooks for a little bit more information on cooking the shank, but found them all somewhat lacking. Google was next up and it also offered surprising little in the way of advice, especially as there seemed to be no distinction drawn between pork shank and ham shank. Having established that as mine was actually pork, so I didn’t need to soak it, I realised that most of the braising recipes required a slow cooker or a tonne of ingredients I didn’t have. I decided to go with what the label suggested and keep it simple!

After leaving the shank out all afternoon to come to room temperature and dry the skin out, I seasoned it and sealed it in a casserole with a bit of olive oil until the skin started to colour nicely. Since I wasn’t planning on eating the skin, I didn’t attempt to get to crackling proportions. I then softened an onion and several whole cloves of garlic in the remaining oil, before adding some home grown sage and oregano and a few cupfuls of gorgeous glistening green Puy lentils. I added a good glug of homemade chicken stock, topping up with water until the lentils were well covered and plonked the pork back on top. Lid on, the whole thing went into a oven at 190˚.

Two and a half hours later, I opened the lid of the casserole to pork and legume heaven. The meat was soft and tender and easy to carve. But the lentils were the star of this show. Shot through sweet morsels of caramelised onion and hints of garlic and rich with pork juices and chicken stock, these were so good I could happily have climbed into the casserole and bathed in these beauties to get maximum enjoyment. Even if I had made twice the amount, I still wouldn’t have made enough of them…

As it was, I have enough lentils for 3 portions and enough pork for about the same, plus a bone to try making more stock or flavouring another dish, making this combo both delicious and economic. I’d like to try making it again with more ethically raised pork as it would make me feel less guilty and would probably be more tasty as well! I highly recommend picking up a pork shank if you happened to be in a Morrisons or a decent butcher. The knobbly wobbly bits of the animal often excel themselves and this cut is no exception!