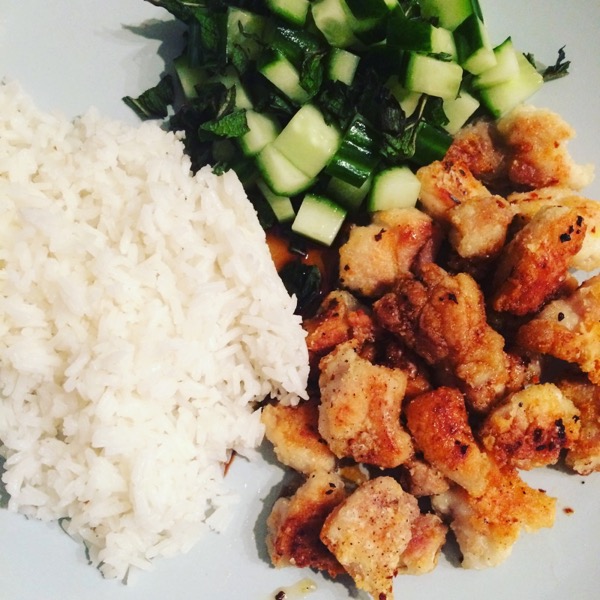 I honestly don’t plan to make all my meals the same colour and ingredients all the time. It just happens naturally it seems and this week I was back to rice with everything but this week’s protein was all about poultry instead of fish.

Chicken and rice are my staple foods. No matter how tantrum-tastic my innards are being they will always accept chicken and rice like a tear stained toddler who goes from hating you to eating the ice cream you offered in a split second. Although in some way my stomach is easier to deal with because you can’t give children codeine…

Monday started off in distinctly washed out fashion both physically and culinarily. After my busy social weekend I spent the day in bed feeling delicate and in need of comfort food. So I tried the Marcella Hazan  rice and mozzarella again with proper arborio rice this time. 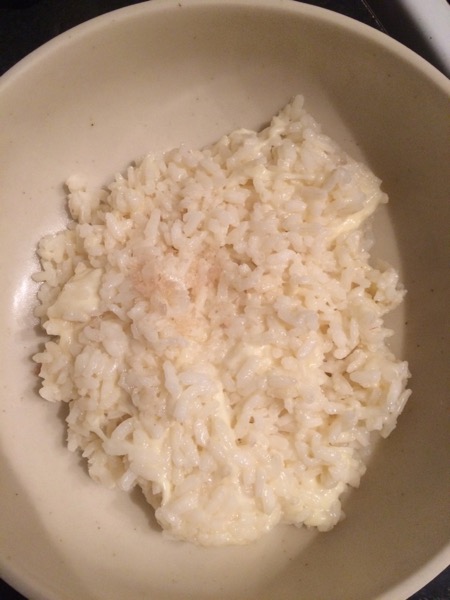 It was even worse than that photo suggests. The arborio had a gluey rather than creamy texture and the overall impression I had of the dish was that it was cheesy rice pudding. I didn’t know I could actively dislike eating mozzarella but you live and learn even when you’re nearly forty.

Tuesday was perked up by gatecrashing nearby friends to eat leftover of the amazing Guinness chicken and being gifted a bag of pink and yellow spotted potatoes branded as hippotamuses by said friend from the Lidl kids’ section. Please note that I made it clear above that I have no children and am not even youthful anymore. Novelty potatoes never get old frankly. 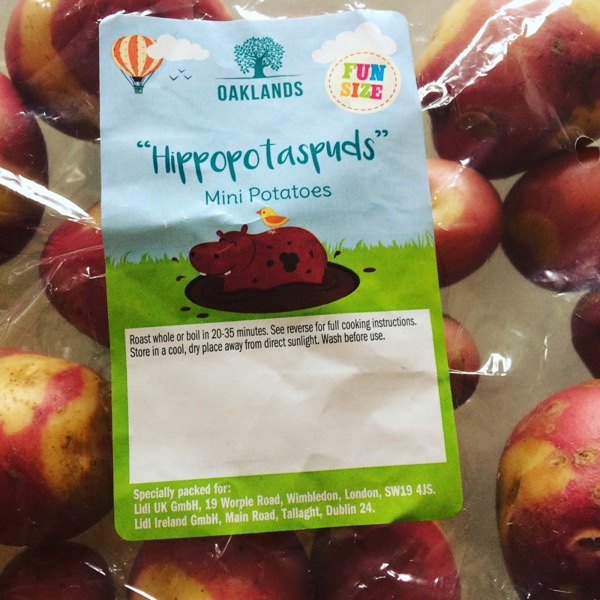 Not content with just chicken on Wednesday I made chicken and turkey meatballs to double the bird on the plate. I like the flavour of turkey mince but it doesn’t bind well being so low fat so I finely chopped two skinless chicken thighs in the food processor and added them to 500g turkey mince to baste it all. Some ground sumac and fresh mint and parsley gave it all a vaguely summer feel despite the early arrival of autumn.

I bound them with grated courgette and an egg and shaped them into about 20 meatballs that I chilled well and then baked in the oven for 25 minutes as I still wasn’t sure they wouldn’t fall apart if turned in a frying pan. They worked perfectly and would have been great with a tomato sauce or even in a noodle soup. I served mine with, surprise surprise, rice and some carrot salad and it was a much fresher brighter plate of food than the light levels in the photo suggest! 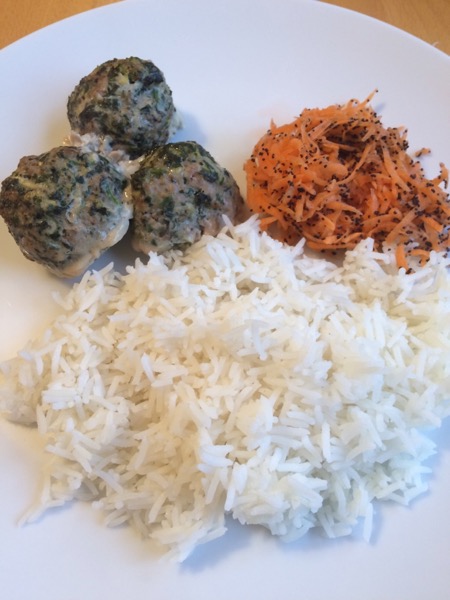 I took a night off chicken bothering on Thursday to eat sushi with friends because god forbid I could go a day without rice huh? So I thought I’d make a special effort on Friday and avoid rice completely and make meatball quesadillas. 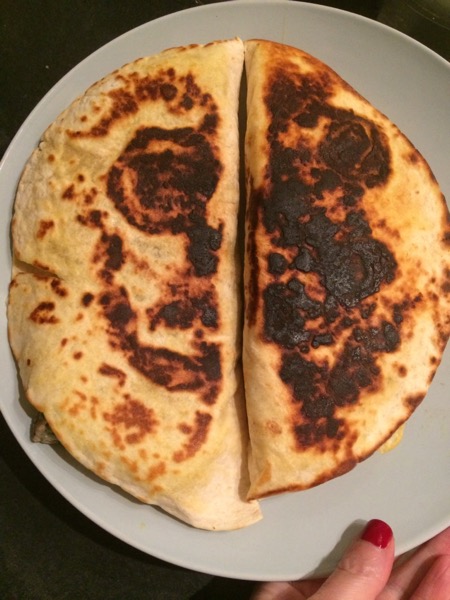 More shocking than the lack of rice on that plate is that if I left to my own devices I would happily never eat melted cheese again. I don’t particularly like it and I don’t particularly like how fussy and frankly disordered my eating habits around it are. For example macaroni cheese is fine. Other cheese sauce is not. Melted Cheddar makes me feel queasy. Kraft cheese slices on a burger are tolerable if there’s no other option. Pre sliced Emmental warmed but not completely melted is standard breakfast fare for me on a muffin but I wanted to see if I could try and teach myself to eat grated melted Emmental too so this was a practise quesadilla.

I started with the bare minimum of cheese possible and chopped the meatballs small with some tomatoes and folded the tortilla over, brushing it with oil and frying on each side. I could have done with having the pan on a much lower heat for longer as my tortilla started to burn before the cheese melted and held it all together. But it was delicious and I ws enthusiastic about the cheese.

So it’s a pity that I discovered a rogue fodmap trap in a seemingly ‘safe’ meal. The tortillas use a humectant to keep them fresh called glycerol which is one of the polyols in the fodmap family. I immediately felt bloated and deeply unwell blaming it on the tomatoes at first. I finally put two and two together next morning while standing feeling incredibly hungover and unwell waiting for the kettle to boil and realising that my notoriety for hangovers has probably been more fodmap than alcohol based bizarrely.

Saturday was a total write off of a day and all I could summon the energy to cook for dinner was roasting some chicken thighs in the oven and serving them with microwave rice on the side. The salty crisp chicken skin and soothing rice did help and I felt less like I wanted to rip my own head off for pain relief afterwards. 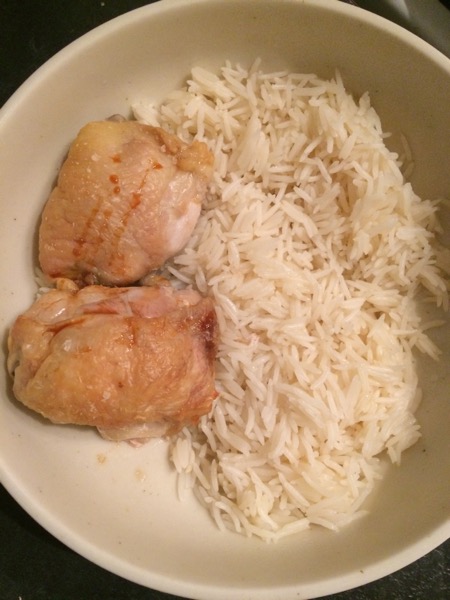 I was feeling much more dynamic and able to cope with colour on Sunday. I spent the afternoon enjoying the unexpected sun in Brockwell Park and marvelling at how much nature an inner city park has. I saw the neighbourhood heron, was divebombed several times by a hefty purply blue black dragonfly and watched parakeets scatter as dogs chased them. Not a bad afternoon and I was in the mood for something flavoursome and summery afterwards.

I adapted a chicken recipe I’d seen Laoise Casey post on her Instagram feed before it went into her column for the Evening Standard by dredging chicken thigh in cornflour and frying until browned and crispy and seasoning it with sea salt and chilli flakes. I made a quick dressing of Chinese sweetened vinegar, tamari and maple syrup to pour over it and the cucumber salad I made and piled up some rice.

And it was fantastic. The chicken had a properly crisp coating despite using hardly any oil and the salt and chilli gave it a takeaway vibe that worked well since I can barely ever order Chinese food these days and I miss it. The dressing didn’t turn it soggy in anyway and it was all fodmap friendly and gluten free and took 10 minutes to make in total. That cooking technique is a keeper trust me…