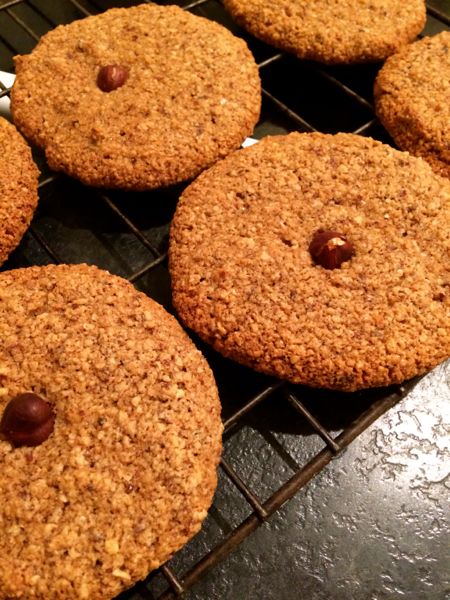 I think we could safely say I’m not a natural vegan. But, and I know this is a cliche, my best friend is and I wanted to bake her something this weekend when I visited. So I turned to the internet to research veganizing recipes and I remembered about the new big thing in vegan circles: aquafaba.

It turns out that someone discovered you could use the water from a tin of chickpeas to create a vegan substitute for egg whites. You simply whisk them into an emulsion and use them exactly the same way as you’d use actual eggs. Easy peasy, although probably not at all fodmap friendly seeing as all those pesky galacto-oligosaccharides reside in the water of tinned pulses.

But veganism and my brand of fodmaps are massively incompatible we probably don’t need to dwell on that. And anyway hazelnuts aren’t fodmap friendly so let’s just concentrate on cooking for other people today shall we?

These are a popular Christmas cookie in Germany and are basically a hazelnut macaroon known as Nussmakronen there. They make a fantastic wheat and gluten free festive treat and a change from the almonds that gluten and wheat free people are obligated to eat in all baked goods it seems.

Sainsbury’s sells ready ground hazelnuts which work well here or you can blitz them yourself if you have a strong enough blender to not make hazelnut butter. I’ve made them with egg whites and now with the aquafaba and the only difference I noticed was that my aquafaba batter was looser in texture because a whole tin’s worth of chickpea liquor makes the equivalent of five egg whites when I needed three.

But otherwise these are the quickest cookies to make that I whipped my batch up at 10pm on a Friday night and was still in bed by 11pm. In fact they probably took less time than taking my make up off…

Beat your chickpea water with an electric whisk. I was amazed to see how fast it started to resemble egg whites, whipping into a pillowy white mix within a minute. I beat mine for about 4 minutes as I wasn’t sure how meringue like it would get.

I then added the icing sugar a third at a time, beating for about 30 seconds in between. The aquafaba wasn’t quite as stiff as egg white meringue usually is but I think as I was using the whole tin’s worth of liquid, my sugar proportions were wrong and tweaking it solved the issue.

Fold the ground hazelnuts and the cinnamon and the salt into the aquafaba making sure you don’t beat the air out of it all. It should be light and fluffy but quite thick in texture. I made each cookie a dessertspoonful of batter and placed them on a lined baking tray with room to spread.

Place a whole hazelnut on top of each cookie and bake them in 175C oven for 13-15 minutes for the smaller cookies and 17-20 minutes if they are larger. Take them out of the oven as soon as the edges start to brown as you want them to still be soft and sticky in texture rather than baked crisp.

Allow them to cool on the baking tray or they bend and stick to the tray. I left mine for about 20 minutes before I lifted them off and onto a rack to cool completely. But handily one stuck to the tray in a slightly malformed fashion and allowed me to snaffle a mouthful.

There was no chickpea taste and the cookies were gooey and sticky and chewy and nutty and the amount of willpower it took me to stop at one mouthful needs it own festival to acknowledge it please. These are so damned good that my vegan friend went silent during the first one, refused to share the second, hid the rest from her partner and asked for the recipe. I think she liked them…