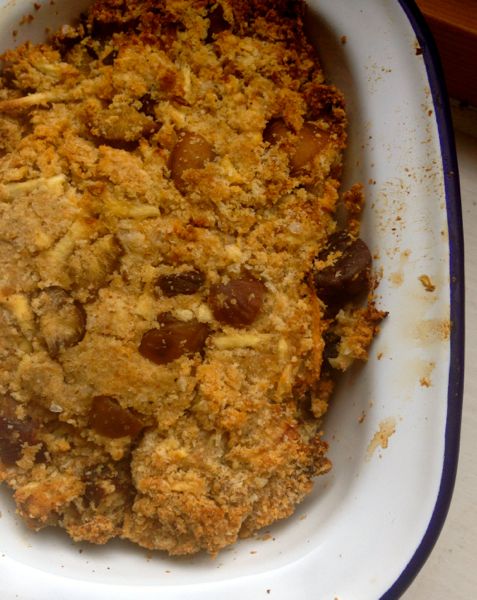 Who doesn’t love stuffing? I had a particular fondness for the stuff you get in supermarket sandwiches around Christmas or even a packet of good old Paxo. But I also loved the good homemade stuff filled with sausagemeat and herbs and dried fruit and served with lashings of gravy. But I can no longer eat most of what goes into stuffing now I’m fodmapping so I’ve been pining for it for the last two years. Could I save myself with fodmap friendly stuffing?

And what do you know? Just in time for both Christmas and Thanksgiving, I do believe I’ve managed it and it’s tasty enough that other people will enjoy it not just us fodmappers. One small caveat is that I can eat wheat so my breadcrumbs were wheat based so if you can’t, you’ll need to adapt it to fodmap friendly bread first.

To get the sweetness that onions usually offer I used grated parsnips and added traditional Christmas chestnuts along with a well flavoured sausagemeat as usual. I tried it baked in tins and as stuffing balls and both were excellent in flavour, but a tiny bit dry so I added some melted butter next time which solved that perfectly.

A higher fat content sausagemeat would help here but I was restricted by choice of fodmap friendly sausages when shopping. Many sausages are now gluten free as standard which you’d think is a fodmap bonus, but in fact is awkward because they use pea starch instead which isn’t fodmap friendly for many.

Also double check for any (dried) onion or garlic or apple or honey in pork sausages as fodmap pitfalls with your bangers. I find the posher the sausage, the more fodmappy it seems to be but Sainsburys, M&S and Heck all do good high meat content sausages without those pesky problem ingredients.

Preheat the oven to 200C and decide how you are serving your stuffing. Grease a loaf tin or individual dishes with some oil or melted butter and set aside.

Skin the sausages into a large bowl and break it up with your hands. Chop the chestnuts as small as possible while keeping them with a bit of bite and add to the bowl along with the grated parsnip and the breadcrumbs. Mine looks so dense because I used some Polish breadcrumbs that are actually for thickening soups instead.

Season it all generous and add the egg and butter and bring the stuffing all together with your hands combining it all well. Roll into stuffing balls if you’re serving that way and place them on a baking tray or fill the greased loaf tin.

Bake the stuffing balls for 20 minutes and the loaf tin for 40 minutes. Serve immediately with generous amounts of gravy. Try not to then eat all the stuffing in one go to make up for the previous two stuffing-less years. You will regret that trust me…

PS: a friend plans to make this for Christmas Day with the addition of some blue cheese and now I need to buy some Stilton ASAP.