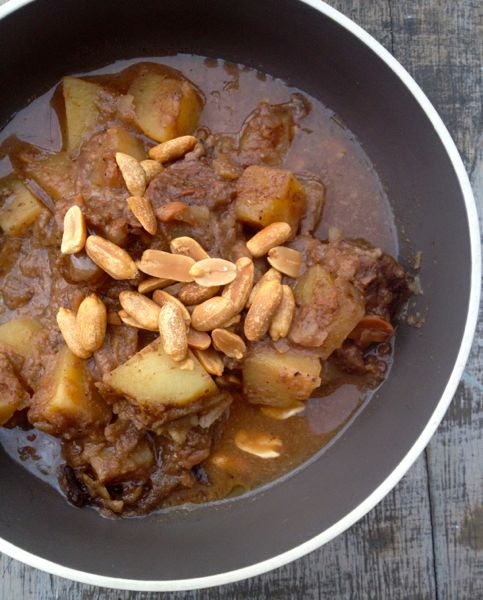 You might have seen the #livepeasant hashtag on Twitter recently celebrating the traditional cooking of the world using British beef or lamb and wondered if it was only British dishes involved.

I really hope it isn’t after the nice people at Simply Beef and Lamb asked me to take part and I immediately started plotting this Peruvian inspired beef and potato stew in the slow cooker instead.

Usually made using traditional South American freeze dried potatoes to thicken the gravy and a mixture of pork and beef, I decided to try a new idea I’ve had for thickening slow cooker gravies using regular potatoes recently instead.

These chuña blanco are one of the first examples of using cold temperatures to preserve foods and harnessed the sub zero climate of the high Andes to create dried potatoes that last for years. I can buy them in Brixton and the flavour is not unlike potato jerky.

It goes well with the other main flavours of this stew which is peanuts and chilli. Peruvians use a mix called aji which is as varied as hot sauces are but always contains garlic, chilli peppers and coriander. The most popular kind in carapulcra is aji amarillo but I was fresh out of that I’m afraid so I’ve insulted a load of Peruvians and adapted the recipe to what I had instead.

I created a thick rich gravy by grating one of the potatoes into the stew and allowing it to break down along with the peanut butter in the sauce and create a rich velvety gravy full of flavour and spice.

Inauthentic my version might be but it was simple, warming and so tasty everyone wanted seconds. What more could you want from peasant food?

If you can the night before, put the braising steak in a bowl along with the onions and garlic and the powdered spices and mix well. Leave to marinate overnight in the fridge.

If you aren’t used to using a slow cooker, let me give you some good news. You don’t need to seal meat or pre cook onions before using them. That dates back to the oldest versions and I find that generally browning the meat beforehand over cooks it and leads to that strange woolly texture you get in slow cooker stews.

This method means you can prep stuff the night before and put it all in the slow cooker crock next day without faffing. Even chilled meat isn’t a problem temperature wise, but don’t chill it in the crock as that can damage the crock and slow cooking down.

This recipe prepares nicely the night before. Simply warm the red wine in a pan and melt the peanut butter and Bovril into it to make a thick paste and set aside or use immediately.

Peel all the potatoes and cut all about 150g of them into 3-4cm chunks. Grate the remaining amount. Put them into the slow cooker crock along with the marinaded meat and the red wine mix.

Add the non ground spices, season well with salt and pepper and add the hot sauce. If you like a bit of extra kick you could add a chilli pepper too. I’m a fan of the frozen chilli paste for the slow cooker actually.

Check the liquid levels. It should be about two thirds the depth of the meat and potatoes. Add another 100ml of water if not. Slow cookers need less liquid that oven cooked stews as they don’t allow water to evaporate so don’t add too much or things will be flavourless.

Put the lid on the slow cooker and cook the whole thing on low for 8-9 hours. The grated potato will collapse into the liquid and make a thick gravy and the spices will fill it with flavour. If you skipped the garlic and onion due to fodmaps, add a tablespoon of garlic oil stirred through at the end for extra body. It needs a kick of allium.

I served mine just as it was (I forgot the coriander for serving) with some roasted peanuts on top. African shops and sections of supermarkets often sell peanuts roasted without being salted and they are perfect here for a little crunch.

I loved this stew and would make it again. It’ll easily adapt to the oven if you prefer, using extra beef stock and I think it’ll be really popular with kids if you adapt the chilli to their palates or even (whisper) leave it out…