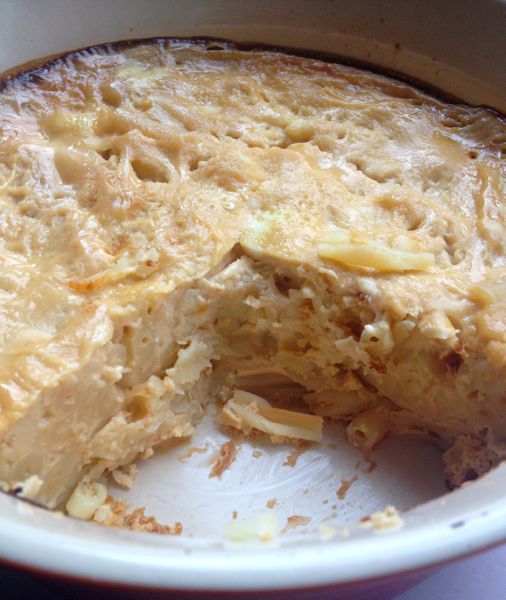 I had such fun last week doing the Rennie Challenge and reading about 1950s food that I ended up doing another recipe to go with it. I was sure I remembered seeing tins of Ambrosia macaroni pudding when I was a kid, along with sago and rice pudding.

However I haven’t seen it for years so was starting to think I must have imagined it when I saw a recipe for macaroni pudding in one of the post war cookbooks I looked at recently.

It might sound strange to us now, but it’s basically a sweet pasta dish. Instead of bechamel sauce as in a macaroni cheese, you cook macaroni with eggs and milk and sugar like an old fashioned milk pudding.

My instinctive love of milk puddings such as good old tapioca swayed me over the fear that if they don’t sell it anymore it might not be that nice and I decided to make one. After all, I’m pretty bloody sure they don’t sell tinned macaroni cheese anymore either.

I found several recipes for making the pudding and decided to bring them up to date for the modern era in both flavour and cooking time. Mrs Beeton suggested boiling the macaroni for 45 minutes and then baking it for another 30. I’m not sure if anyone told her macaroni wasn’t actually alive.

I’d been discussing butterscotch pudding on Twitter recently which put me in the mind to make my own butterscotch sauce for this and drizzle it over it at the end, but the recipe I followed went hideously wrong so I went with the dulce de leche I had in the fridge instead.

Don’t be tempted not to cook the macaroni at all before cooking assuming it’ll work like a pasta bake and save the tiny hassle of a saucepan of water. The world will repay your laziness with a burned dish of carbohydrate you have to chisel clean. Trust me here. I learned the hard way.

Boil the macaroni in a pan of water for about 7 minutes. Drain and run some cold water over it to stop it sticking.

Put the evaporated and fresh milk in the pan you just used to cook the pasta and gently bring to the boil, adding the dulce de leche and butter so they both melt. Add the salt and the vanilla extract and take off the heat.

Add the cooked macaroni and mix well, allowing it to cool for 5 minutes and then beat in the two eggs and pour the whole mixture in an ovenproof dish. Bake in the oven at 150℃ for 30 minutes.

After 30 minutes sprinkle the two tablespoons of sugar over the top and turn the oven up to 200℃ for 15 minutes to give the top a lovely golden caramelly finish.

Allow to cool for 5 minutes and then serve warm. I was convinced I’d find sweet pasta strange when I went to eat it and I didn’t at all. I loved the texture of the macaroni with the chewy sugary edges and the sweet custard.

It was perfect on a cold evening after dinner when you want some proper rib sticking stodge to soothe you.