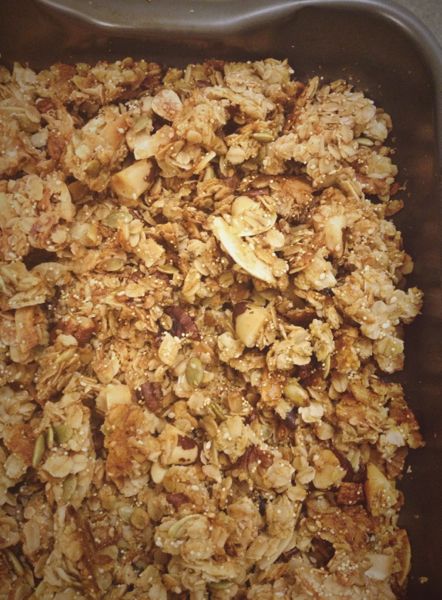 The places that those pesky fodmaps can hide is never ending. If there is isn’t wheat in one thing, there’s lactose in another and honey in the next. Ironically the ‘healthier’ the food is, the more likely it is that a fodmap trigger will leap out at you.

I don’t really eat cereal, but I do love granola. Two things force me to make my own: the cost of the decent ones and the fact they all seem to sneak inulin in there for fibre. Inulin is the stuff that makes Jerusalem artichokes so difficult to digest for most people and it’s a super charged neon light flashing fodmap.

Discovering there was such a thing as oatgerm recently made me realise I could tweak my basic granola recipe to something all fodmappers can eat if I switch the honey for golden syrup. Before everyone gets up in arms about sugar in their breakfast cereal, let me remind you that honey is just middle class sugar. In fact it’s got a higher fructose load than the high fructose corn syrup we are taught to fear but it’s allowed to be put into things as ‘no added sugar’. Ahem.

This is so easy to make and this is a good base recipe that you can tweak to your own preferences. If you want higher protein levels, add some amaranth or if higher fibre is your thing, add chia seeds. If you can tolerate dried fruit, add about 100g as the granola cools. If like me, you like your granola more like a snack than breakfast, add some chocolate chips when it’s cooled.

Put the golden syrup and the oil in a small saucepan and heat until melted together. Take off the heat and add in the salt and the vanilla extract.

Put all the dried ingredients in a large bowl and pour the syrup and oil mix over it all and mix well. It will look like the liquid has soaked in and it will be too dry. Don’t panic. It will be the perfect amount to give a burnished golden look to the granola.

Beat the egg white slightly in a small bowl and add to the dried ingredients. This helps them to cluster together to give that luxurious feeling the posh granolas have and separates it further from its raw cousin muesli. It doesn’t make any difference to the storage of the granola because the egg is cooked.

Put the granola mix into two deep non stick roasting tins, making sure you can move the granola around in them. Cook in a preheated oven at 160℃ for about 25 minutes or until as golden as you like it. It will still be very slightly soft as it crisps up as it cools.

Give the granola a stir round before it cools or it will harden into a massive clump that you will have to chisel off the tray later. I made this mistake the first time and the mice in my kitchen are still enjoying the spoils of it exploding everywhere when I tried to lever it out of the tray.

Once cooled, stir any additions in and then store in an airtight container for up to 4 weeks. It would also be rather excellent in small cellophane or foil bags as Christmas gifts. Just leave the egg white out if you’re going vegan.

It will seem like you spent a lot of money to make a small amount of granola, but remember the ingredients make at least five or six batches for the price of two boxes of branded stuff. Plus you can eat it dry in front of the telly over Christmas and look much fancier than if you ate cereal from the packet…