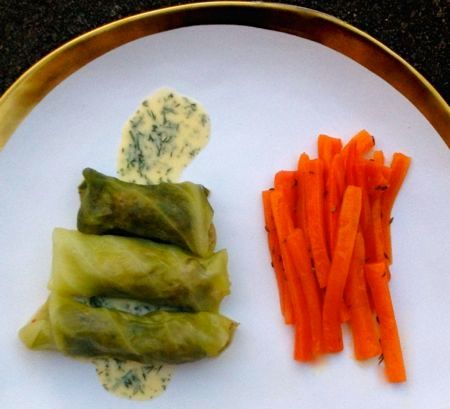 I used to be such a black pudding fan until I went fodmap, but I’d completely neglected its close cousin, the white pudding. Made from oats, onions and pork fat, it has a lot of the flavour of black pudding but without the fear factor some people feel toward blood.

It’s a very traditionally Irish dish, but not really eaten in England and I have to admit I’d forgotten about it a bit until a friend mentioned their love of it recently, so when I saw it in the Ocado Irish shop, I knew I had to get some. Usually served fried in slices as part of a breakfast, I needed to perk it up for dinner.

Most people associate cabbage with Irish food (mainly alongside boiled bacon) and if I’m honest, I’ve never met a cabbage I didn’t love so it was a logical conclusion to use the heavily spiced white pudding to stuff cabbage leaves for a simple meal that promises to impress. I teamed with a beurre blanc and some Vichy carrots for added (and accidental) green, white and gold on the plate.

This might sound like a complicated meal but it really isn’t. I made it while half distracted and apart from accidentally buying dill for the beurre blanc instead of tarragon, it worked perfectly.

Boil a kettle of water and pour about two thirds into a large saucepan and the rest into a shallow bowl. Put the porcini mushrooms into the shallow bowl and allow to soak for 10 minutes. Keep the pan of water at a rolling boil and carefully peel the leaves of your cabbage off one at a time. Remove the central rib and split the leaves in two if using the pointed sweetheart cabbage.  Blanch each leaf individually for about a minute and use a slotted spoon to fish them out again. I lay mine on a clean tea towel.

Call that slotted spoon back into action and scoop your porcini out and finely chop them. Add to a mixing bowl, along with the spring onions which you have also chopped as finely as possible. Crumble the white pudding in, adding the extra seasoning and mash it all together with your hands.

Lay a cabbage leaf out at a time and put a heaped dessertspoon of white pudding on it close to the base. Roll the base of the leaf over the filling once and then fold the sides in as well to make a parcel. Keep rolling the leaf until the filling is completely covered. Repeat until all the filling and cabbage leaves are used. I got about twelve from mine. Steam the leaves for about 30 minutes.

While they are steaming, cook the carrots. Peel them and cut into batons (or if you have baby ones, peel and leave whole) and put in a saucepan. Just cover with the sparkling water and add the salt. You want to season them quite heavily to mimic the salinity of Vichy water (but without the sulphurousness.) Don’t forget the sugar. Boil them rapidly on a high heat without moving the carrots around as you want the water to evaporate leaving a glaze on them. Mine took about 15 minutes to become tender. I then added the butter and cooked them for another 6-7 minutes on a medium heat. Add the caraway seeds at this point to soften them or they are unpleasantly crunchy.

Carrots under control, turn your attention to the beurre blanc. In a dry pan, soften the shallots (I only had spring onions so used the whites) for a minute or two. Add half the tarragon, wine and about half the vinegar and reduce down for about 5 minutes to infuse the flavours.

Add the cream and bring to the boil. As soon as it hits boiling point, start adding the butter, whisking vigorously until it comes together. Take it off the heat and blitz it all with a hand blender until foamy and add the remaining vinegar and chopped tarragon.

Serve the cabbage leaves with the beurre blanc and the carrots on the side and enjoy the praise for a meal that’s full of flavour but with very little hassle to make. I kept the main course a little lighter so you could enjoy the cream of potato soup and the coffee Baileys marshmallow pie in style too. Perfect to give cabbage a new lease of life for the doubters! 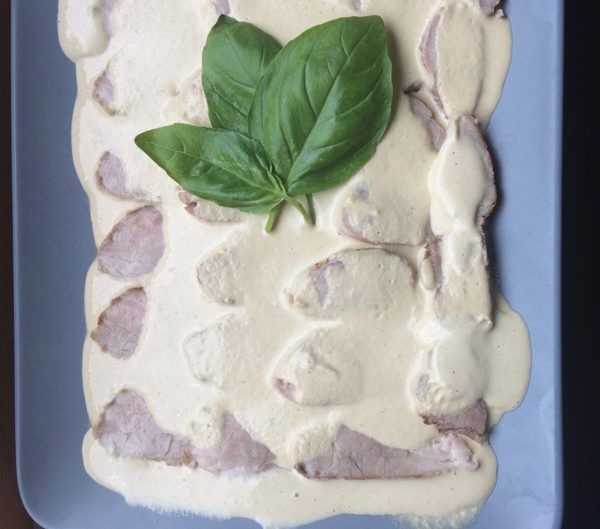